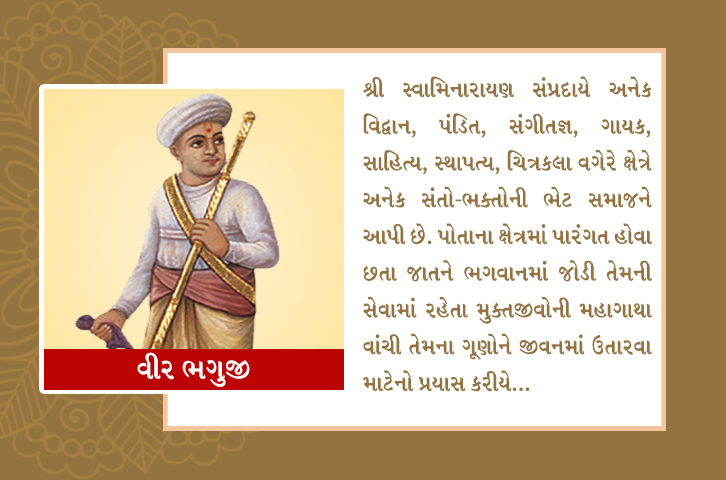 Rajdhani Randhir Shurveer Pardhaman Bhaguji was born in the village of "Moras" in Rajasthan. Rajput was a handsome giant. Bhaguji was in love and bravery in the natural Lord.

Once upon a time, Sukhanand Swami went to Rajasthan to spread satsang Bhuji got the gift of Sukanand Swami and found the saint of the saint, he got the seed of the liberation. He made a firm resolve to meet God.

Shreeji Maharaj's first Darshan in Sidhpur, in the chit-instincts of Jyotusara Vairagya flame flare. He prayed to Shrihari that keep me in your service. Shree Lahiri was pleased and kept his bodyguard. His body strength and fortitude was so unique that neither Kathiawad kathis were able to swim in front of Veer Bhaguji. Bhaguji's palm towards Lord, his obedience and many of his heroic figures are scattered across numerous pages in the history of the sect.

When Mandangarh Garas was struck with a masonry, Maharaj sent Parshadra and Bhaguji to protect the farm. Then there was a fierce battle with two groups named Khadad and Vatka. Bhaguji showed his own anxiety. At that time Bhuji defeated the enemy party by tolerating him with eighteen fatal wounds.

Shreeji Maharaj was always in the proximity of mind and always remained intact in his service like mind. Shriji Maharaj often tried to test them, but he did not make the determination of Goddess of uniqueness. After the disappearance of Shri Lahiri, he stayed with Brahmanand Swami and spent the rest of his life living in the main.

The brave and spiritually wise people like Veer Bhaguji will remain in the middle of the eclipse of the time of the death of the dancers, and their memories of Bhagvanthitha and bravery will be done.