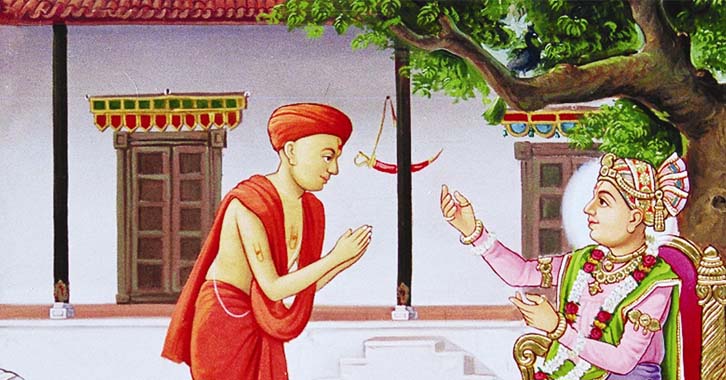 Laljis family were very religious. They were the devotees of Atmanand Swami, Guru of Ramanand Swami. He spent most of his time serving Ramanand Swami and also at night travel to Bhadra and had discussion with Mulsharma.

Lord Swaminarayan said to go to town. People know him if we change appearance, shaved head and moustache and gave a cloth around the waist. Lord Swaminarayan requested Niskulanand Swami to preach in Adhoi and write a scripture called Yamdund. Shree Hari stayed here for two days and went to Bhuj.

Niskulanand Swamis relatives came to ask him to return home. They accused him of living home because of home trouble.

A high officer of British Empire wanted to meet Niskulanand Swami. They came to Dholera and saw Niskulanand Swami working at an age of 80 covered in white dust of stone. The officer was very pleased.

Niskulanand Swami wrote 23 scriptures in Sanskrit, Hindi, Gujurati and Kutchi. He also knew about music, as he was a renowned poet a wrote numerous poems. He kept on writing scriptures until his death.