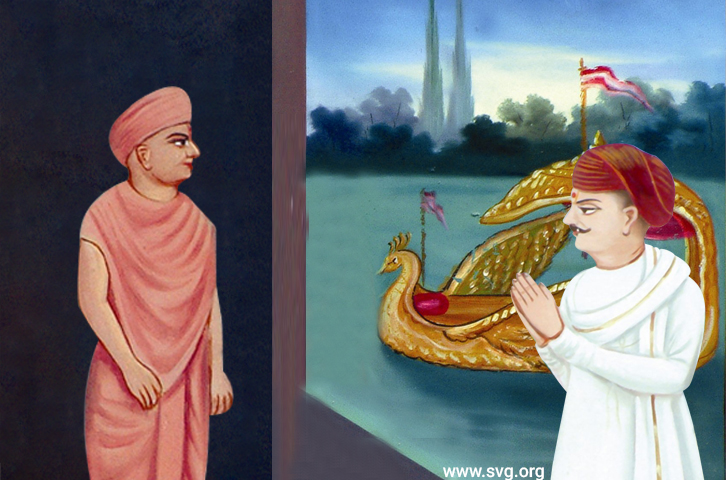 Two sadhas from Gadhada went to Vadhis brother-in-law in the moving village of Bhadra. Bathing the water in the well and bathing there Then Shreejis attention and worship asked the boy that your father is happy? Then the boy replied that my father has left the body. Then the boy asked, what was my fathers job?

Then the Saint said that we are the descendents of Kala. If it were, Then the boy said, sit down now. My mother will take two breads of bread for me, and you will feed two loaves of bread. And I will go to my house and go.According to this, his mother brought her food. Then, after the rituals of Ratna Bhagat, the two saints got roasta and dal and went home to eat.

Then the saint went to rest after two minutes. After many years, when the boys end came, two sadhus had to feed two rotiBy doing it, the boy went to Devlok. After several times in the Devlok Then someone asked a big god that there is more happiness than any other persons happiness? When God said that this temple of God is eternal, then the happiness of the dham is more than this happiness and no one comes back to the dharma.So birthdays do not happen. When this person is missing from the people, then he goes back to the dead and is born.

If you want to go to Lords temple, then your mother-in-laws Bhagat has become a saint and if you live in Dholera, then you will go to him. Then the goddess Ratna came in the brother-in-law Bhagats Dholera.There is no such thing as it is to say that there is no such thing. Six months have passed since that time. Gopalanand Swami Dholera came to Gadhde to go to Gadhde.

Then in the morning Gopalanand Swami worshiped. Then Swami came to Vigyan Dasji.When Gopalanand Swami, who is worshiping, asked Vishnavidasji about the news, then Shankar Dasji told me to have a pain. Then what is the sadness of Gopalanand Swami? Then Vishnidasji says, by calling me my former name, someone calls me at half-night but I do not speak, because if there is a woman and if I say, I would have fasted.

Then at the same time, Gopalanand Swami took a glimpse of himself.Then say to the scientist that your brother who had fed his two sadhus by Poona, your brother has gone to Devlok and wants to visit him in the temple of God so that he calls you and you call him when he comes today, So they will come free of one Akshardham and take them to the dham.

On this night, when Gopalanand Swami asked him to take the aircraft on the night of Bhatnagar, he started speaking like Hatti Ratnama in the middle of the night. Then the scienceist said, who are you? Whoever is here comes here. Then the goddess will come. What is the idea of ​​Shree Vishnasdas who saw it? Then he said to go to the temple of God.Then Shree Vishnasdasji told the Koti Parabati by law, what do you see?

When he says that I see Gods eternal dham and he describes the dham. Then he asked what it is now? Then the saying appears to be free. Then Shreevandasji said, go free to Akshardham with free music. Then, after telling Vignanasadji, the devotee of God went to Shreeji Maharajs Akshardham.