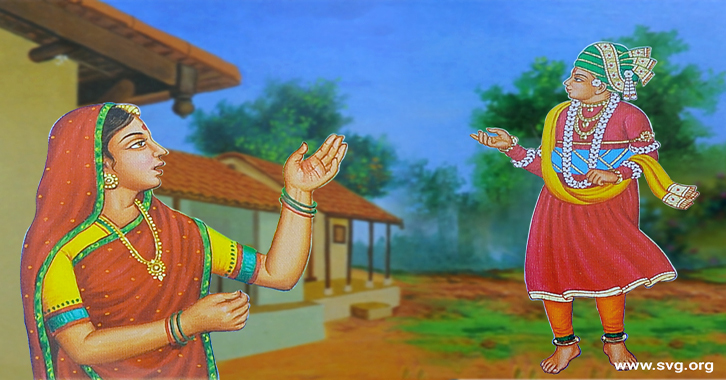 Gurdade Shreeji Maharaj went to Junagadh with the call of Zinabhai, including Brahmachari saint-paarsad-Haribhakta. In the village, Matusree Panchibai of Ruparv Nag Nagar made a plan that Shri Swaminarayan God will ask for everything from me, and at ten oclock, without eating the knot at home, I know the inner God.

By doing such resolutions, he went there to his friend and told him all the above things. After that, the Sakshi Sankhi also decided that after breaking sugar by milking sugar, no one would see me standing in the door of my house. If you ask me for milk by taking my name, then I will worship them and worship them.

She went there first to the lady standing on the road and said that Maniba opened the door and said Shreeji Maharaj, who would bring your milk to drink, because you want to get a satsang. By saying this, he drank the milk of Maniba and after receiving the satsangi rules, he went to the house of Panchabai from there.

If you were standing there, then Pabibai placed the bed bed. Then you say a woman who came to your house with an inexhaustible meal and go for lunch. Then Shreeji Maharaj said that the newly held agitation should be done. Find out for new copper strips. Get new drinks. Bring new lots and new salty water to drink

Saying that, including the brahmachari, the young woman sat down to drink. At that time, Maharaj said, I will not go, because if you give me a hundred rupees and gold, then I will eat. Then Panchibi opened the door and placed the gold winger on the finger and handed a hundred rupees.

Then Maharajshri sat down to eat. In this way, after completing interimimity, he completed all the resolutions of Panchabai, so that the woman got Shreeji with the current Dhari kitei Peri Satsangi. Shree Swaminarayan worshiped Shreeji by following the rule given by God.