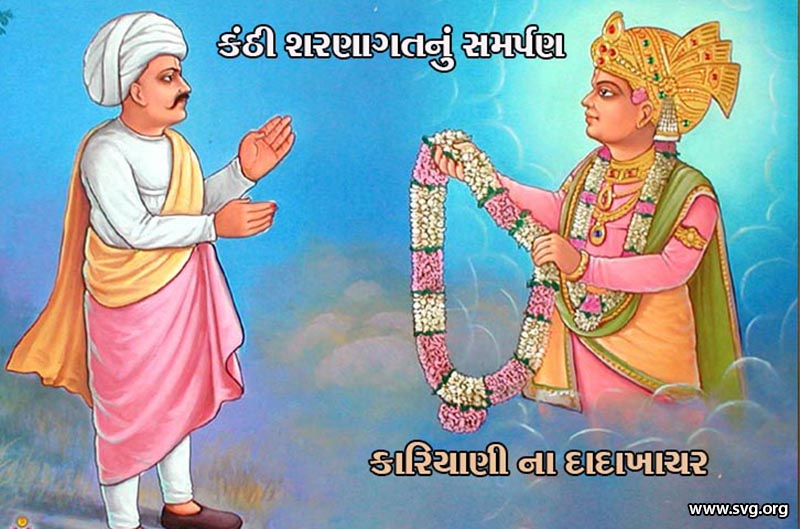 There was a devotee of Goddess Dakshachar in the village of Karimani. He stood on one foot in front of the statue of Shreeji Maharaj in the Dada Temple and kept two hands high and assumed every limb of the statue and turned five nests. And Dadakhtas were constantly worshiping metal statue of Shri Harikrishna Maharaj in Balasvavad with antiquity.

Gangaajal and Ghranta take the vines of the trunk and bring them to the village. After that, he went to the villages of Bawa and built tanks by giving the Ganges water to the people, who came running around Kanahiram. He was sitting in the village with a thief. He gave gangaaje to all of them and gave them the throats of throat and they gave them banaa. Then he came to Shree Swaminarayans shrine and worshiped Shreeji Maharaj and came to Dada Vishnu. He was sitting to worship Dada-worship.

Therefore, without taking the bravas, the devotees of Shriji Maharaj changed their wreath by keeping their minds in mind, and by reciting the Siddhakshina-Dandavta-Shikshapatri, they used to sit idle due to greed, even after twelve oclock in the day when they passed the ektha and eight odds including the idol of the idol in the temple. Dada, when he saw him, where did he come from? Then he says, I came here by giving all the Ganges water and vines in the villages passing through the Dhama.

Here also, he gave me the water of the turbans and groans and gave me his power. You can also take ganga water and dust and fulfill my hopes. I could hear the promise of Bana, which I just got confused. From there, I always bring water from Prasadi Purushottam Srisahajanand Swami, I am always drinking water. And in my throat, the trunk of Tulsi is pervasive by the festivities of Shri Gopinathji.

So I do not touch the throat of the thighs. I have heard the word of Bawo who thinks I am wrong to take the Ganges water. But the nipple will have to be overcome. At that time I called Dada Kshatriyas who drew me from my dhikruna. Its a bad idea that you make fun of me. Where can you say my grandfather who is my dhunankan? I am the worshiper of the real Shree Swaminarayan God. If you want to attain moksha then you will get rid of my knees.

Otherwise, leave it as you walked. When I say Baoo, I am Chandubhai, when I say Kadam, I will not bow down to you. I have to bow down to you when Im tired of you. Therefore, when the said rule goes, then the bavah went on arriving. If there was a rule in the home of Dada, then the other did not bow down to others as they did not take the others beard. Such were the rules of the Supreme Rule. We too should keep such a rule so that Shriji Maharaj was pleased. He will finally laugh at Akshardham. Be sure to follow that rule.