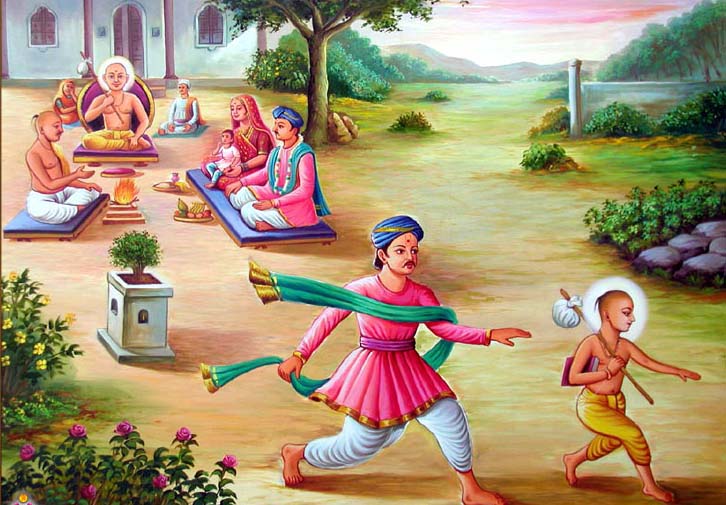 Ghanshyam completed seven years. Bhaktimata thought that Ghammshaya should now be honored. He called Brahmin Harikrishna Upadhyay to the mavichari. Gori of Harichrishna Upadhayya Aakha village. Very Holy and Sada Brahman. He immediately took his own pooja, wearing a turban, wrapped his scarf and reached Dharmadev at home. God called them with respect. It was easy to sit down. Then he said, I want to know my son Ghanshyamam, give me a good look at Janoi.

Harikrishna used to wear glasses, made a scarf and then opened the ponytail, began to think of the finger. After completing the calculation, the mohutcourt was removed from Monday by the fagun sud tenth (v 1845).

Religion started the preparations of Hanuman according to religion. Dharma God has written quotes to each and every relative and Brahmins. Decorate the entire street of Ayodhya. Painted the house On the walls, paintings of birds, deers etc. painted. Build a large tent outside the neem tree outside the house. Corolla Proof Arranged between creating a colorful glass tree. He put a lamp in between the trees. The tree has a twinkling twine mirror. Lots of four-walled lanyards and chains hanging. Colorful silk wear and a splendid shirt begin to appear. Anyone who sees a porch will be amazed to see the glory of the tabernacle.

Dharmadevs house bursts through the morning of the morning on the day of Fagun Sud. Women started singing Mangal songs. Gore Harikrishna Upadhyaybhai started with chanting mahotsav with Brahmins, gave offerings in the yagya and started firing by adding ghee, barley, sesame seeds etc.. Gore Ghanshyam was conceived. Then he called the Rambali Hajam to do the trunk of Ghanshyam. After bathing and wearing a yellow flame.

Dhanshyam came into Yajmandap. At the parents feet, they bowed and offered a sacrifice, there were Brahma, Vishnu, Mahesh and other gods in the sky. Flowers from the sky. Then Ghanshyam took the gurmantra. After that, he took the garb of Brahmachari. Behind and relax. In the hands, the penalty penalty and the payment of the lease. He asked the five parents to give a gift to Gore,

Until then, it was in the afternoon. Ghanshyam came to the square of the village to wear banyan bhukku and Ghanshyam was running. At first, women singing Ghanshyam and his Mama Vashram Bhai, Dharmadev and other relatives-and behind them, singing the poem of Mars. All of them stood north in the square. The son will run or bend and Mama will take Ghanshyam. But Ghanshyam thought, I want to do the welfare of infinite creatures, run it or go straight to the Himalaya forest. Mama can not hold. Then who will go to all the places from the Himalayas to revive.

Thinking about this, Ghanshyam ran. Mama Vashram Thakh Dodiya Mama too Dodiya, Ghanshyam does not come in hand. Then Mama tired. He praised Ghanshyam and said, Hey Ghanshyam! Get caught, turn back, keep me lazy. If you go, parents will be very sad.

Ghanshyam thought, The parents are innocent and holy, so do not let them go. Guess its back. Vashram Mama got very much pleased and took Ghanshyam to the tent and took him to the tent. Giving Rs. 5 in the hands of Ghanshyam Ghanshyay gave it to father. Then everyone began to fall and sit with Mataji and eat ghee, jaggery, rice.

The goddess worshiped Brahmins and monks and gave up wear and tune with dakshina. Send sweets to everyone at home in the village. Everywhere, Ghanshyam and dharma were shouted.