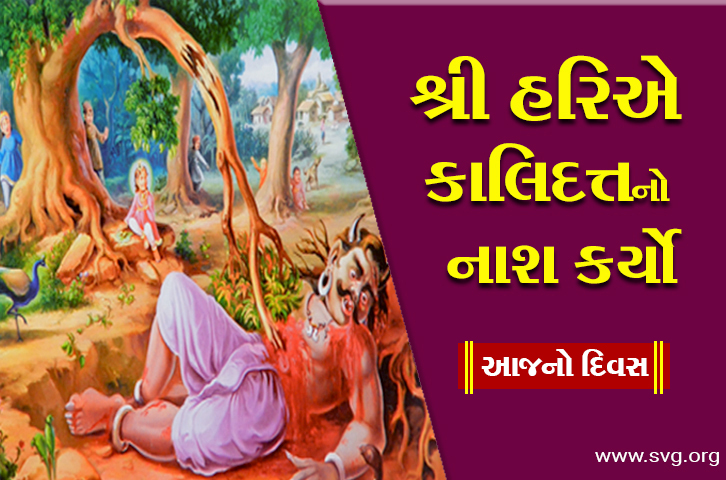 Suvrat Muni said, O Rajan. These boys started playing Dhanshyam Maharaj under a mango tree. The sun came to a halt. And there came Kadidatta Asura there. He was happy to see Dhanshyam alone. He started going to them to catch God. Going closer, he was rebellious in the Lord's power. As a result, he used to love the sadhu. The wind blows. Trees began to fall. Electricity began to take place. The rain falls The sky was dark. At that time, the soaked children remained standing under a tree.

The children standing below the tree remember Dhanshyam. Forgetting Dhanshyam and putting it under the tree. What happened to Dhanshyam in this storm? What is the answer? Children become worried.

At that time, Kalidatta Dhanshyam sat on the tree that was sitting. Trees of the tree started spreading over Dhanshyam. It is like helping the dalai Dhanshyam as an umbrella. Kailadat lied his hand to catch Lord. But the child was fascinated by the Lord's vision. A second tree started to devour the head. She died after her head broke. Kalyadatta died after giving death to him.

O Rajan, on the one hand, began to distinguish between left-right organs of religion and village people. Everyone suspects Dhanshyam is where. Religion became devoid of devotion. The lamp lantern took all the weapons and came to Abwadi. Chapaiyajas and children were found. It is said that the odd is gone. Under him was Dhanshyam. There, all these people came looking for Dhanshyam. Dhanshyam is the first beauty mummy. I met Bum Padi Dhanshyam. He was pleased with the devotees and gave gold whiskers to the Mummy. Survivors also saw the dead Kalidatta. Dharmadev said now the strength of the Ashura will be reduced.