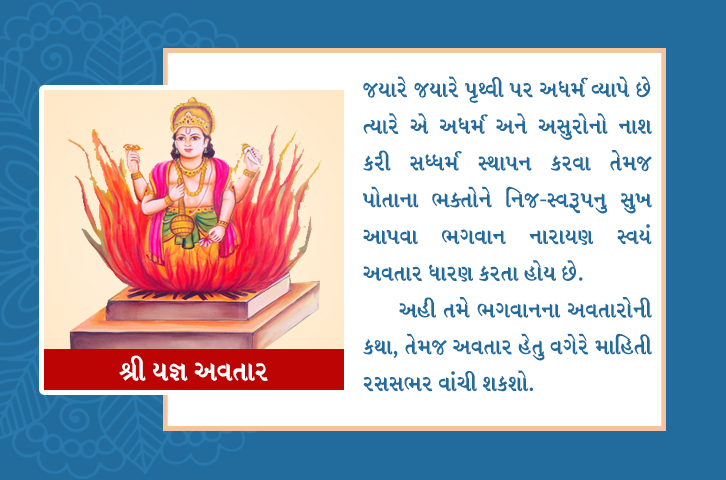 In many incarnations in the beginning of the universe, Yagnavtar is a unique incarnation. God appeared differently to make the groom given to the Prajapati, who had a terrible penance for the area of ​​the world. But there was no speed in satisfying the development of the universe. God has assumed incarnation as an incarnation for the basic purpose of the growth of the universe.

Lord Scientists manifestation is believed in Swayamvu Manvantar. Photographs of Yugantors history have said that Manu betrayed his daughter with the interest of Prajapati Rishta of the figure, that he would keep Manu with interest and son who would become the jewel of this work.

Anukha and Prajapati have a happy life in the interest of interest. There he was born son Ratan, who was brought up, nurtured, brought up by Manu. This is the only Lord Sri Yagna of this Kunvara of Attitude.

They focus on various ways of sacrificing the ecosystem for the development of society. It has shown the dreams of social development at an instant. Ruchikumar was rewarded by the society as a Yagna when he received a fancy success by offering sacrifices in the personal activities of the society. As a result, the book of history has been depicted as a "sacrifice" to the follower.

Scientist married with a bride named Dakshina. There he was born Dwadash sonrathna. This is known as Dwadash Yam. 1 worshiped as gods

Shrirvak prayed to God to accept Indraprayy for Gods help in the human world, for countless gratitude of the universe. God accepted the induction of wealth and power to enrich Akshay Bhavan of divine power. For God, Swayamu Manvantra, Lord Shiva, was born on the throne.