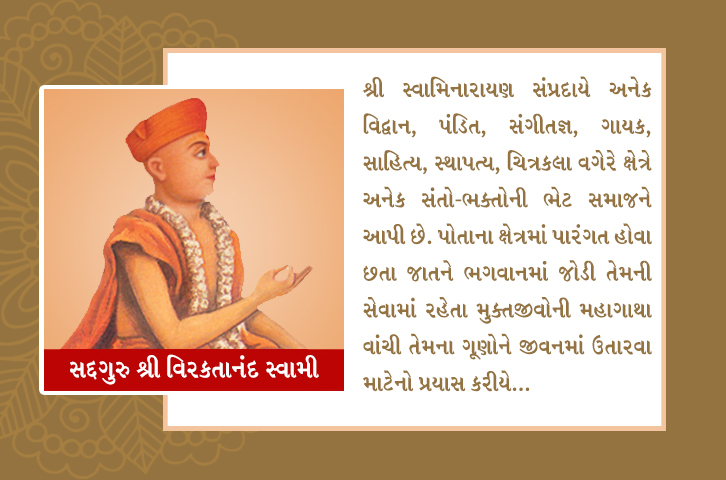 Sadguru Viraktanand Swami was born in Kallodara village in Khambhat Baran in Bhal Pradesh. They were devout and lovingly attached to God. Vairags color looks like a worldly poison. So staying in an immersive condition. So Shreeji Maharaj gave his name to Vyaraktanand, "Yathya Prat and Nama". He was very talented and proficient in dealing with Shri Hari made him the first Mahant of the Gadhpur temple. When Mahant became the master, he ordered that after dedication and dedication, do good service to the temple of Gadhpur and keep the possibility of Saint and Haribhakt.

Once Shreeji Maharaj took up the sickness, saints and parsds served on the feet of Maharaj. So Shreeji Maharaj was very pleased with them. So calling Mahant Vitraktanand Swamy of Gadhpur in the Character Room and commanded that these Saints and Parsodas had done a very good service to me. Therefore, even after distributing sugar to the people by sharing them with sugar, Veeraktanand Swami used to make greed for the sake of gobbing and all the celibate chariots and Haribhakas etc., he found out that Maharaj was made of pomegranate so that he became a leper.

Once the money was asked to give to a poor Brahmin, it was not given. Maharaj thought that liberating Viraktanand Swami from the bondage of vyavahar and making Parmanand Swami the chief of Gadpur. For ten years Virkata Nand Swami was the chief of Gandhapur.

When Vishaktanand Swamiji realized his mistake, he felt very sorry for his repentance, and he could not follow the instructions of Maharaj. After serving the Sri Lahiri, according to the order of Maharaj, he left the remaining life and went to the shrine of Shri Hari.