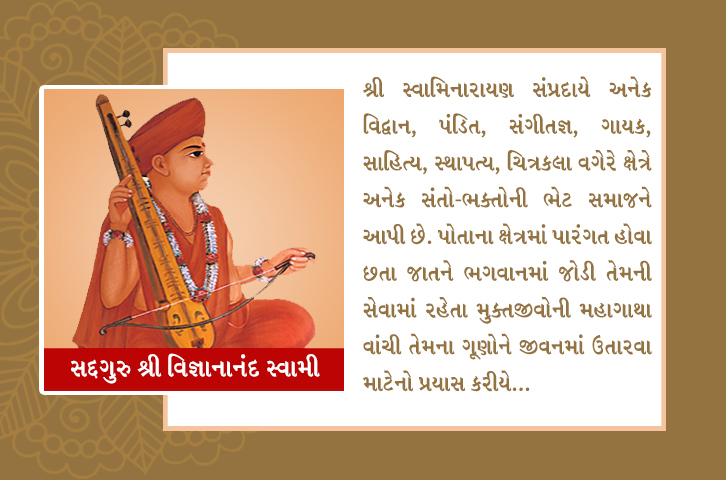 The aristocratic land of Saurashtra, which is the tragedy of Lord Krishna. It is situated in the heart of Dyotak Prabhas Kshetra, which has a mythological and historical value in the land.

There is a renowned "Patan" village near the famous and sacred shrine. Vishnanand Swami was born in the village of Vikram Samvat 185, Mahasud Vasant Panchami, in the month of Mangalik festival. His fathers name was Ganesh Bhatt. He was a well-known Vedic anthropomorphic scholar. He had two sons and a daughter. The name of the eldest son was Someshwar, the daughter of Jaya Gauri and the younger son was Govind Ram, and it is Govindram that is only our Vishnanand Swami.

At the age of eight years, Govindrams sacrament has become sacred. Due to pre-sanskars, he practiced ritual and Vedic literature in the long run. Being exalted by exaltation, God devoted himself to contemplation in the worldly life and spent time in meditation. As the moksha prakruti virtues are priceless in them, the intense aspiration of Saint Satsang becomes vigilant that Paramahansa or Saint Mahatma can be found in the Lord and the gifts of Bhavsagar will be avoided. There Govindraman received the welcome of Muktanand Swami.

Govindrams conscience was attracted to Lord with the scriptural explanations given to him by the liberal conduct of Muktanand Swami. Swamantranand started listening to the message of Swami. Wished to wear kashayas in his heart. On the day of Samvat 1870 Fagun Sud Ekadashi, he started his homage with Muktanand Swami and started his work on the day of Samvat 1871 Kartik Sud Ekadashi and named it Vignananand Swami.

Vigyananand Swami came from eastern labor with a good study of Sanskrit Vidya. After being renunciated, Muktanand Swami was adept in doing classical studies of music education. On several occasions, Maharaj gave them prasadi items to please Shriji Maharaj by singing kirtan in the meeting.

Vigyan Nand Swamy was a scholar, along with musicians and well-spoken librarians. He used to help him find and write many verses and texts of Muktanand Swami. Shreeji Maharaj sent him to the country, known as a mountainous region known as the mountainous region, Jhandi, Jambusar Barra, Rajasthan, Marwar etc. for the promotion of satsang. During the whirlwind of the protest, Swamiji made a very good satsang there. Nishkulanand Swami, whose name has been taken in Bhaktichintamani script.

Vishallalji Maharaj has called him Mani Vichar in the scholars of Harilalumrut by seeing Vignan Nand Swaminarayans Vinay, Vivek and excessive creation. "Vignan Nand Swami Vijushajamani, I was the pass" (Harililamrit, he was also well-versed to Ayurveda and Jio Tish).

Vihari Lalji Maharaj appointed him as Mahant of the Surat temple as he was fully observant of Satsang and kept fit. At that same time the satsang of Surat was very prominent.

In the last state of Surat, he started meditating meditation, taking one of the snacks and taking a snap of life through the penance. In 1940, Pratap was told in the Pratap of Jit Veda Baras 1, and he was called "Jaiswamiranayana" at the age of 91.

Prayers of the devotees of Al-Bala, and devotees of his knowledge to the people of the world.