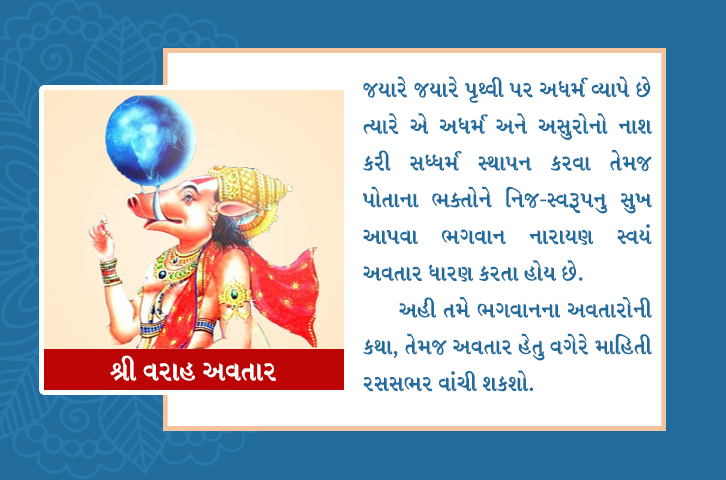 At the beginning of the pyramakal, Lord Brahma gave Kamalasanastha the task of moving ahead in the creation of the universe. Disturbed Brahman in the concern of development Attached and the body became part two. Female-man Shatrupa and Manu   Since Self-realization originated from the concept of Brahma, it is called Swayamu Manu. When the woman was attracted to all aspirant, she asked. When the couple commanded to help the creation of the universe, Manu asked for a place to live, because the planet was taken into the Adi dhitya Hiranyaksa Kisan. Brahmaji requested to show the way to the very heart of God, not finding any place. Kripanaidhi Lord immediately heard his prayer and shed the meditation Brahma, from which only Anguamam emerged as a white cloth. Before this child can understand no understanding, this Varah became like an elephant and roared like a cloud and entered the ocean in view of the observation.   In this process, God-demon defeats all and eats the ego of the idol of Lord Vishnu and asks Naradji, Where is Vishnu? Narodi made a decision and pointed the finger in the water. Wherever Hiranyaksa enters the ocean, Lord Shrivera gets upset on lifting the earth on two teeth. Even though Hiranyaksa was awakened, God, without hearing anything, established this earth on the established path and gave the answer to the thunderbolt of the battle of Hiranyakash and not only gave it to war, but also defeated and gave moksha motion also.   This godavari was manifested in white form, hence the concept is called the white clay. After the liberation of the earth, the earth which God has associated with God describes in detail the Varah Purana. Apart from this, the character of the Varah is also the race well with partial distinction of various granthos. In short, the incarnation of God Varah was born to save the planet.