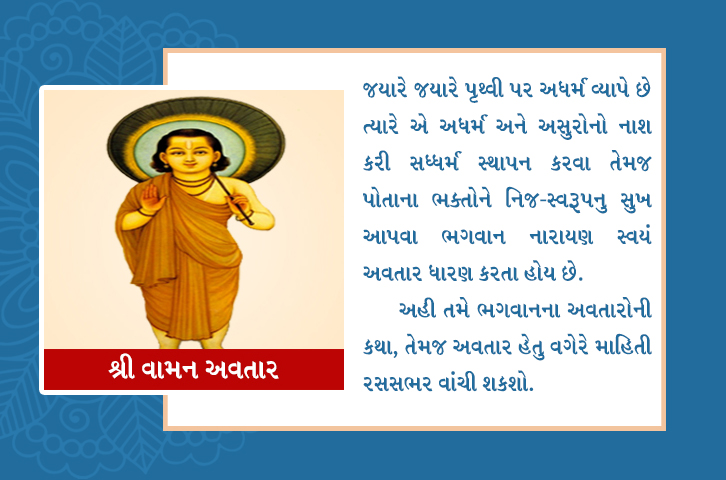 Baliraja sacrificed yagya by Guru Shukracharya and ascended on paradise by achieving Divya Ratha, Akshayabatha and Shavacha. Bala Trilok became the winner of Bhagya and Bhagya, who were killed by fear. Even Aditi, the mother of the gods, did not like this. She prayed to husband Kashyap. Show a remedy to get our sons reproduced.

Kashyap said that the refuge of Lord Shiva is all-round deer. Aditi launched the 1st day. Falat: The God blessed by the Lord blessed him.

Vishnu appeared in the form of Dwarf on the 1st day of Bidharva on 1st April, by Kashi on the day of Aditi. After receiving his fathers command, Upendra Dhaman reached Narmada on the banks of the sacrificial yagna. All of us welcomed the brahmacharya of Balakrishi. When Baliraja asked to ask something, Vamanji asked for "three steps of land". Shukracharyas ears were raised on hearing this. Surely this is Vishnu, otherwise such a fool can not do.

He stopped donating sacrifices. When Bali rejected his proposal, Shukracharya cursed the sacrifice of being corrupt by the state Lakshmi. Without fear of the scourge of sacrifice, when the three measures of earth donation were observed, the Lord first assumed the form of Virat from Dwaran. And then at the first step, the lock above the earth and the second step takes the following lock and where the third step is placed, the sacrificial animal shook his head.

God was pleased with sacrificial devotion, and his gate was made. Even today, his guard is in front.