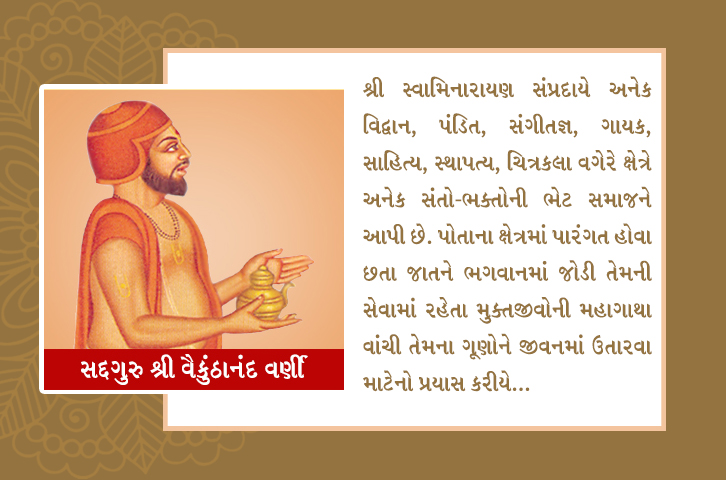 Aishwarya Murthy Sadguru Shree Satchidanand Swami came to Dwarka with Ranchhodraya and Gomatiji shrines, showering Ranchhodrai in the Varalal and bathing in Gomatiji in Dharu lake will give blessings to Dwarkas pilgrimage.

When Srihari started the practice of giving first paternal offerings, the sacred service to give the paternal and maiden offerings to Brahmchari Shri Vaikunthanandji was given to him. Their homeland was the "Khadol" village of Bhal Pradesh. They studied the lesson of dedication, dedication, and living with Alzhiji Brahmachari after adopting initiation. As a result of living with original brahmachari, there is also a unique opportunity of Shrihari Seva.

Vaikunthanandji made significant contributions in the one and the other times of Shriharri. Shreeji Maharaj sent to Laoya to give news to Karian Vastakshatra. From Raghavanand Swami and Brahmachari Kariyan, they made big bucks of brinjal and chilli extinct. He picked it up on his head and made a saffron and filled it with sugar. Such a noble service was spirit.

Shrihari ordered the Acharya Shree Raghuvveerji Maharaj to stay in the service of Swadham Samanma. Brahmacharya has followed this order of verbatim to the end of the body.

Many such small big events are woven in Brahmas life. With the help of life, you have to get the blessings of Brahmachari ji repeatedly ...