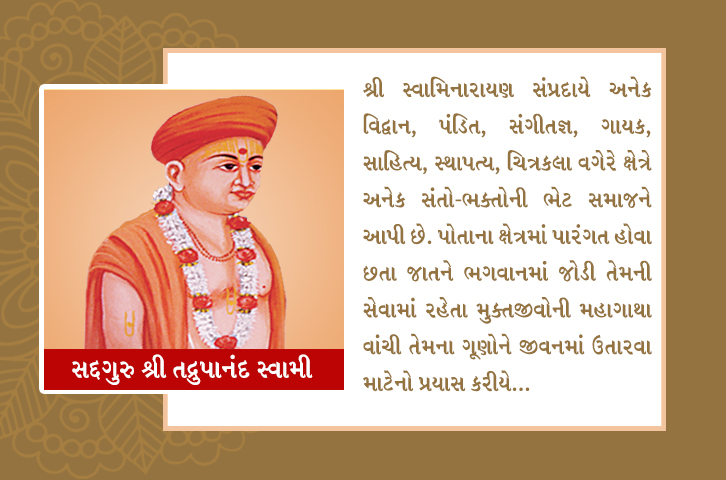 Tadupanand Swami was born in the village Karajisan. He left home from Vairagya to renounce himself to Maharaj. Shreeji Maharaj initiated him and named him "Tadupanand". He was a disciple of the great poet Kabiraj Brahmanand Swami. They lived in the indigenous tradition. He was a good scholar and a devout saint. In them, creativity and rhythm were easily formed.

When Shreeji Maharaj was performing the temple of Lord Vardal with the command of Shriji Maharaj, Tadupanand Swami Brahmand Swamiji used to go to the villages surrounding the order. At one time, when the Swami was going for a ride, he did not wear a pair of legs, too much heat and Trishna too was too much, so Swami got dizzy and fell to the earth.

There was a parabana of Brahmana water in front of it. The Brahmin saw this sadhu falling down and ran there and inquired about Swamijis clean water in the lota cleaned, and after drinking the water, Swamiji got peace, so that Brahmin was given bed by bringing Swami to his roof. Swamys very beautiful service. Swamiji is good, so Swamy is ready to walk from there. By the service of the holy saint, the Brahmans wisdom became pure. Swamiji began to cry loudly in his stages and said, "Swamy!" Im superb. I am a Brahmin assassin. I kept a low-cast woman in my house.

My brother came to explain to me, I got angry and I killed him in his head, so he died, so people were expelled from the village. Then I too felt a lot of regret and I removed the woman too. Now night and day my heart burns, so O Lord! Please be free from the mistakes I have made and my credit is mine. Swamy was so overwhelmed that he took her along with him. There, Shreeji Maharaj was sitting in front of the temple of Lakshminarayan.

There he came to Samaritan immediately after the silhouette of Madhuri Dixit. Then he awakened from Vip Samadhi and accepted Shrees acceptance and Sri Lahiri freed him from the sin of Brahma Vaahitya. At that time, at the meeting, Vadgadias Vagmodiya Ramchandra asked Shreeji Maharaj the question which, O my majesty! What is the reason for which there is a relative life, which is also called samadhi? This question has been answered by Maharaj in the 14th Vermal of Vrittal. After that, the blessings of Brahmin Brahmanand Swami, Tadipanand Swami went to his house and became happy.

Tadupanand Swamy presents the narrative story for satsang in Udhadesh, "Terepanand Swamis Speech" is a popular practice in the tradition. It is being said that Swaminarayan Amulya Prasad is giving the knowledge and wisdom of knowingly and spiritually. Tadipanand Swamy dedicated this life to Shree Lahiris life and devoted his life to Satsang.