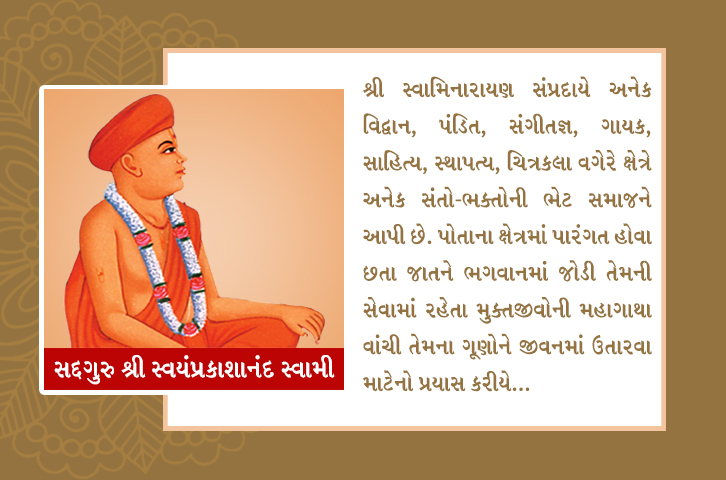 In the country of Bengal, in a village near Calcutta, he had a self-centered position in a large place of vairagiri. Once there was a vairagya who came to the shrine and talked at different prices. There is a life span in Saurashtra. It is called the manifest God, who sends Samadhi to the people of Gods temple. At that point of time, it started appearing too much. Mahant came out to see such a light in the night, came back to the room and looked like the first light. As long as the Vairaggi was in the conversation

Until the light is full. Mahant took the idea that talking about Aishwaryas impossible sea haloola. Then how much will there be in him? Need it to be God. Her heart began to burst on the earth. He was a nischaya nirjaya. The true ambition arises because of the unfolding of Gods manifestation.

After a few days, on the occasion of pilgrimage to Dwarka, a few disciples took horses and camels along with them. In the pilgrimage of the pilgrimage, he came to Shreehari to take a bath. Taking the image of Sriravir, Chanting Mahant came to Samadhi. Sriram in the temple of darshan in the temple of darshan darshan and Soharini Sohamani Murthy was marked on the memorial. Seeing the divine Pratap of Lord coming out of Samadhi, Mahantji gave the title of Mahatant post of his throne, three thousand goldsmiths, gold coins, beads and gave it to his younger guru.

Then he bowed his head and said, "I have served you in your stage." Sri Lahiri says, "We have to live according to our command. "I do not know." Shri Hari gave them the name of "Saiyaprakshapatanand" by making them a saint. They were older than Maharaj in the age. Addressing him as Sriharibhai. Therefore, in the satsang, the brother was also known as Swayamprakashananda. Swayam Prakashanand Swami was a saint in the congregation. He was a scholar. So the learned saints live with them.

The high peaks of the Atyasamma became the master of the image of Lord Shiva. The question he has asked in Vachanamrut is his story. The vast majority of his subjects are self-reliant. Swami Prakashanand Swami Samvat, who laid his body in the satsang vibhana in the Satsang Vibhav during the lifetime of Lord Swaminarayan, passed away in the year 1963 and Akshardham became stale.

Swami Prakashan Swami, who used to call upon the devotees of Lord Vishnupta, who was the master of Gods Divine Pratapapurna, propagated to many scholars from his own life, and Kirti Kothi Vandan in the feet of Swayam Prakashan Swami ...