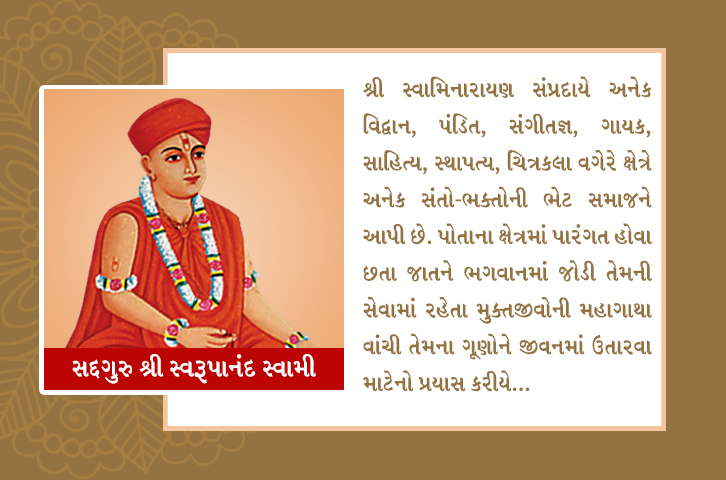 Sree Swarantand Swami was the saint-guru, who showed the dominant power of "Shree Swaminarayan Mahamantra", with divine annihilation in Navkhorn.

The pages of the history of the sect say that after the Ganesha of Uddhav, one of the incoming ascetics of Dwarka traveled from the corner of India, did not return home.

"I have seen a lot of love in the west." He left the house and left the house and went to Dwarka, moving towards a moving deodor, and received a glimpse of Shri Krishna in the Samadhi chapter. It is believed that the person who has seen this eloquence accepted Srikrishna as his self, and adopted the name Swaroopanand in the first line of five hundred and seventy-five hundred.

This Swaroopanand Swami was a saint male who was a very capable Akram idol, yet Shreeharis Agnya came to the village of Shire Dhari village. When Loya and Nagadka came to the sight of Shriharri, they asked Swamiji, how many satsangs were done? Then Swamiji said, "Yeh Nimbki Below Manuishe Vis Hai". Swamis listeners heard that someone did not know whether he would have done Kalyan or not. When the self sentences of self-realization are the whole of the highest state of Swarantanand Swami. When Sri Lahiri says other things, Kalyan will happen, but his vision will benefit many.

Though such a statue was consecrated to the idol, even after taking the responsibility of discharging the duties and holding big responsibilities in the big festivals. Swamy took care of the responsibility of the royal family when Jharlpur was crowned Maharodra. Not only this, the historic task of evacuating the cemetery of hell by swearing by Swaminarayan Mahamantra in Yampuri has also been done in this capable assembly. Principal Vihari Lalji Maharaj notes that

Seeing the animal suffering in hell, in the heart of pity.

Taxes are repugnant, Narayan is a strong Patan.

For the Brahmi position of such a rare occasion, often the Jodhgadh jogi, Santashri Gunatitanand Swami, who is giving flowers to Praful Praises, today we also believe in the Sankranta stage. Be happy to offer Suman