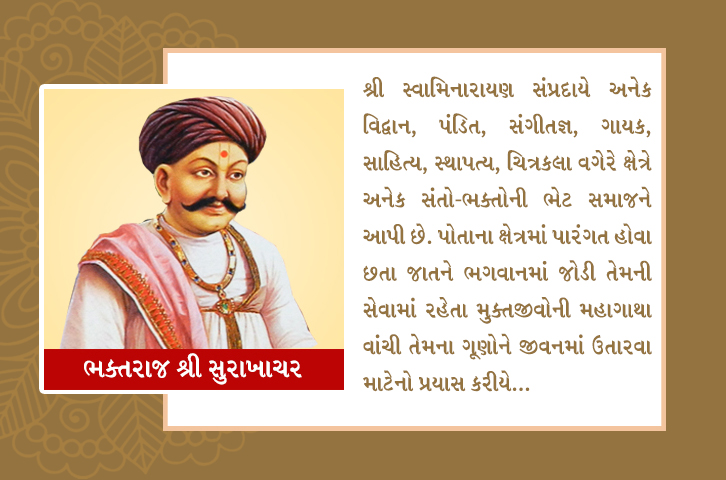 Lord Shree Swaminarayan was a devotee of only one of the devotees of Sri Guru Swaminarayan, who was accepted by Shrihari himself as his "goodwill". There are many such occasions in Satsang that when Anandkand Sahajanandji is sitting sad, this Bhakta Raja has come and spreading fun with the laughter.

This Bhaktraj Shree Surakshahra Loya and Nagadka were fond of these two villages. His wifes name was Shantaba. The sons name was Nathakshachar and the daughters name was Valu. Who is unaware of this devotee, who is a devotee of Raja, Punjabi, Swabhav, funny, Dharma Shura, Vairagya Pura and devotion?

Bhaktraj Maharaj has called 18-18 Vachanmriti in Darbargadh in Surakkhaor. Sriharri has done Shakutsav with 12 mounds of ghee and 60 mangya brinjal in this Darbar fortress. The testimony of Lohas first Vachanamrut is given by the witness of Paramahansa in Darbar fort. Due to the presence of lunar eclipse, nat ramadia, ghaan dhyaya, dyea, and many other layas like Surakshaa, there was a lot of greenness in Darbargarh Bhakti. Leiyadhams leopard is written in the form of the dedication of Surakhkachar in every grant of the Aaj sect. Write and keep writing.

The distance of this security is to take the halo of the cemetery of attaining Albela. Whenever he came in a sitting meeting with a sad sister, she was naturally nodded like a colorful person when he was laughing at laughter. When the security started speaking, Sriharri reached with his arms and reached the corpse, and even though the listeners laughed so much that they were stubborn and religious in religion.

When Jasdan went on the occasion, when the woman was alone on a pilgrimage, the woman did not leave the yoga, and from there directly to Garhpur, Maharaj gave a gift of gold to the neck of the "Indriya fortress." Loya Loya came and fulfilled her life time by pledging Brahmacharya, she used to live forever in her Darbar fortress. Therefore, in her Darbars fortress, she used to worship herself in the Darbar Gurdwara, so that she was sitting in the court of Lord Vishnacharma in Loya.