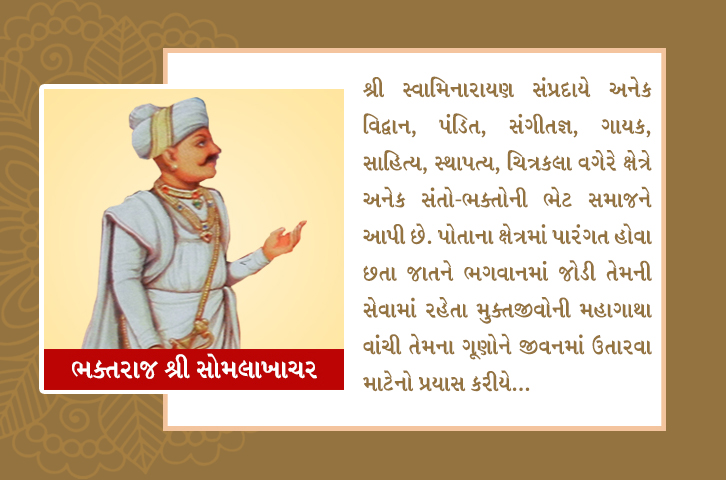 "Our nature is basically Brahmachari and Somaloha Khatak Adik Harijan. For some years, we know that we live near him." Recognizing the presence of the non-Self inaccessible, Vedavyadya, by the speech of Shri Mukhesh, through the speech of Shri Mukhesh, the brave Bhaktiraj Somala Khachar, who attained the height of his natural nature, Botad was a native of the village.

Like Laxman, the young man who reached the age of youth as he served Ram, at the age of youth, Somkalakshachar left the Raj Vaibhav, pomp and devoted himself to the service of whole life by wearing white garments. He became a leader in the bodyguards and replaced the name of Shrihari in Saramangal Stotra. When it is inhuman, Somala Khachar Staying in service with an umbrella in the room.

When Lord Swaminarayan showed a record in the worlds spiritual abandonment by placing royals at the behest of a paper, it is also an important name for Somalakshto in devotees who introduce their disciplined status and obedience.

This Somalpa Khachars dynasty was spectacular. The sons wifes family was very holy, but instead of living a happy life through him, he gave papers of Sriharani fire test. Soon after a small illness, both young and Goddess-like children left the mortal body and went into service to indestructible. The responsibility of the house is to stick again. However, the service remained steadfast in dedication. Selling the land of the village is a continuous service. As a result, many of his stories are read in the charitys granthos. His name has been specially mentioned on valorous occasions. This devotee has come out as an ideal in the form of Vachanamrut. Blessed is such a devotees.