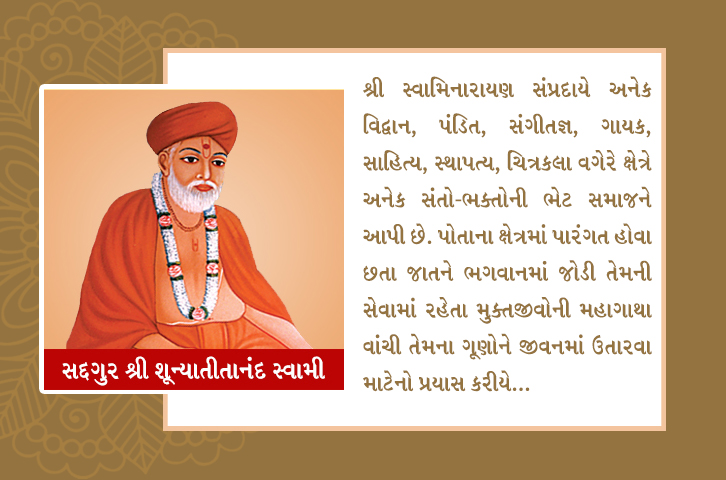 The minister who saved the devotional service saved many souls to lead a charitable life of devotion. By whose cohorts, he attained Brahmavastha and attained the Lords revelation. There is no mention of Shunyatitanand Swamy who had such an impressive supernatural personality in the village. But like the mother of Raja Gopichand, he taught Vaagyagra to the king of Gopichand, Shunishtanand Swamijis mother taught him to be a saint and taught him.

It is also heard to read a tradition that Maharaj Shreeji Maharaj sends Khaita to take wood for Kanti. When Khimjee sittar sits in Bhavnagar to sit in Bhavnagar, a barrage in the vessel is disgusting to Lord Swaminarayan, because Khimji is throwing the seeds of mud of udder on the quill, but Khimji is not unique to Shrimali as the unique refuge of Shreehari. Bajwa Khimji apologizes to Surat for coming to the port of Surat. He is dependent on Sriharina. Shreeji Maharaj gave his name "Shunnessatanand" after taking his initiation from Srihari after the deep shouting of his distance.

Shunyatantanand Swami was the nephew of Naranarayananand Swami and was the chief disciple of Nityanand Swami. He remained in the service of Shri Lahiri for seventeen years, got Maharshis untimely rajas. Shunnatantanand Swami went to Surat and did a good job of satsang. He called Swarantanand Swami in Surat and built a beautiful shrine there. Since he was skilled in dealing, he also made him the chief of Surat.

After Shreeji Maharaj went to Akshardham, in the Lakshmi Wadi, where Shreeji Maharaj was cremated, Nityanand Swami constructed the Smruti temple under the supervision of Shunnessatanand Swami. So he was also a good pragmatic, sculptor.

As the Swami promised, he removed the suffering of many devotees. When the writing started for the temple in Surat, Dayaram Khatri, a very service-oriented devotee of that time, earned four rupees each day and had a weak condition of nourishing his family, even though he wrote a hundred rupees in the service of the temple. Then they were worried about where I would bring them. After sleeping at night, he talked to his friend Dhiraj Rambhai. He gave a hundred rupees. When this information was received by Swamiji, he was very pleased with them. Then Swamiji again gave a hundred rupees to Dayaram to Dhiraj Ram, and said, "Thank you for doing this hundred rupee business." The blessings of Swami are very happy.