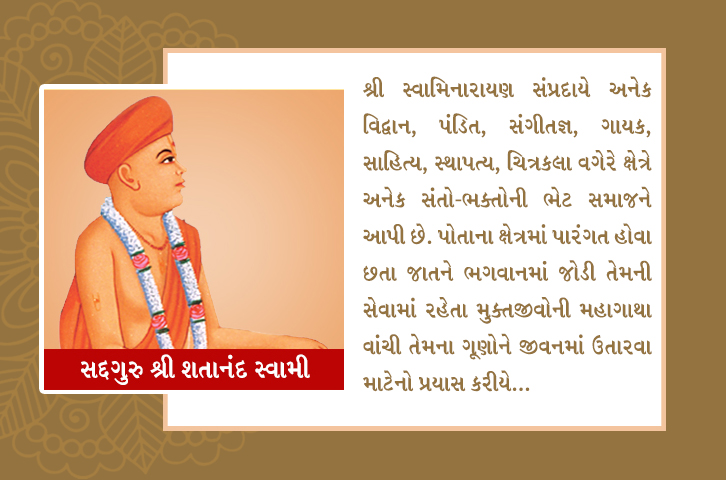 The literature of the people whose Swaminarayan sect is unique. It was born in the house of a Brahmin named Vishnudutt in "Mithila Nagari", which was made by Jana Raja before birth of Shantanand Swami. The father named his son Shatanand only. After introducing his sons education, he started his studies. In the short term, the Vedas, theology and the Puranas have gone to the Vedas. But he was not satisfied with his discipline, he had to realize the Lord. He became a vairagya with the past sacrifices of the East, so he took his fathers orders and went home to do penance. There, eat the fruitful fruit, and Narayan meditates all day long. Narayana was pleased with his penance. Then the Muni asked for the groom that you will always remain in front of my sight. So, serve your stage, praise your children.

Lord said: Now I have been manifested on earth as a human being, I am currently in Gadhda village in Panchal in Gujarat. Vishnu came to the Yagna in a straining condition of Shatanand pilgrimage. There, he saw Birajela Maharaj in the midst of Paramahansa and he made a humorous welcome and welcomed him with a beloved promise and initiated Vaishnavi Sadhu and assumed the name Shatanand Swami, remained in the service of Shri Maharaj.

With the grace of Shrihari, he was meditated without Yogyas. And the knowledge of the ghosts and their children in the past and the present day was given to them by Sriharri and I am Maitreya Rishi. Even the knowledge of their previous birth happened to them. In the Mahapooja, Shatananda addressed Swami as a teacher. After that they came to Garhpur with Sriharri and they built the "Satsangi Jeevan", "Saramangal Stotra", "Janamangalastoto" and "Adial Grantha". Shatananda Muni has thus created the scriptures and has made invaluable service to Srihari and sect. Shatanand Muni taught himself some of his disciples, "Satsangijivan" Rasveda Suvratmani (Swarupand Swami) etc., which he himself created. Suvratmuni made Pratap Singhrajana his hearing.