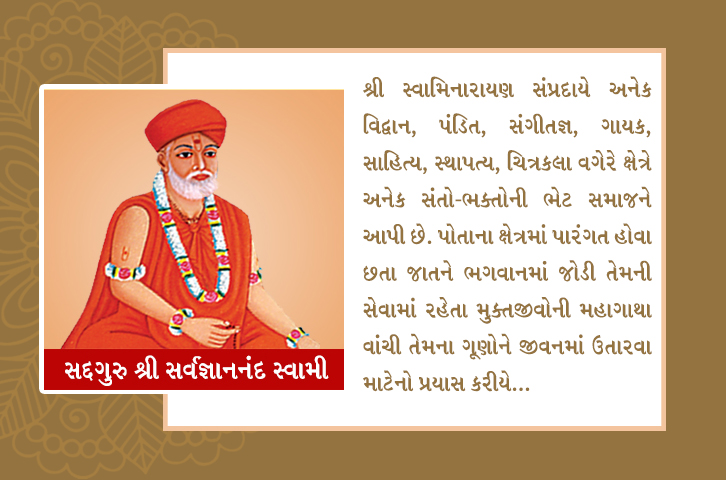 Swaminarayan Swami was a native of the village of "Mankovacha", a small village named Mankhukva, a little away from Bhuj on the low land of Kutch. His predecessors name was original.

Once upon a time Shreeji Maharaj used to go from Bhuj to Mahakumbh. There, Jigarjan Mitra, the friend of Raduji, said to Muluji that Muliji is now Lord Detha. Anand was delighted to hear the voice of Mulaji. "Krishnaji" and Muljji used to enjoy their pleasure and say that God had placed them with them, even though they still had him? Both Krishna and Nathji got confined to the union. Only after seeing Darshan of Lord Maharaj, the distance between Krishna and Muluji got settled. By taking the decision to devote Sahajanand Swami to the feet, the two devotees stopped at Gadhada and the Sangh decided to leave. In a few days, send our sons back from the paper on Maharaj.

Maharaj showed the letters to both of them and told them not to leave you here. Both of them made many prayers but Maharaj was not one to two. After that, the two Vasanthi villages brought the Satsang to Sutara for six months there, but did not go back home. Both parents ran everywhere. Finally, in a Samaiah, Maharaj asked, where were they? Have your parents searched for you from these days? Shreeji Maharaj says, "Maharaj, we have to live with you." Shreeji Maharaj says: "You have to bring a written letter written by your parents. Both of them demanded the fathers consent, but none of the two cheated.

Once upon a time, Maharaj Mankova went to Adabhai Darbars house. There, Maharaj asked in the meeting: "Today all have to renounce all. All the meetings were made in the meeting. There, Raduji came to Krishnaji Maharaj. He said, "We will come." Maharaj says: You have become a Paramahansa, but you will not be able to survive the next life. Maharaj says: "Both of you stay in the home of the house according to our command." The test was filled with loud noise and people also laughed.

Maharaj sent back twice. But his vairagya oasheyas did not get better. Both of them thought that the body of a great man has been found, so now the service of Maharaj will not be restored. We will cut off the bondage of worldly life by ourselves. By doing so, both of them hit the limb.

Raduji Krishnas self and Gods clothes became the Paramahansa of Lord Rama and became Gadhada. Maharaj recognized both of them, but they were unaware and asked, "Whose are you?" They both say, "You are." Maharaj tells Parsodh: "Put these two out here."

Parsodo throws both of them out of my court. Both the villagers went to the front and joined them in the high praises. Both the tone of the silence and the boogie bend over the spirit of the heart. Satyagraha was being thrown out of the dragon There was a consolation in the distance of Maharaj to seer the heart of the devotees. But the cumulative burning of the East was necessary to cleanse both.

Maharaj asked Prabhadra to bring Radha Krishnaji to him. Seeing the two coming away from the distance, Maharaj was completely condemned. In this, they embarked on paying the price to both of them. Both of them shivered Maharaj. On the next day, Vidyavit initiated the name of one named "Sarvagnanand" and named the name of "Ghanshyamanand", they lived in Junagadh.

If you want to take bath in Triveni for excessive faith, liberation, and nischaya, then if the memoirs of Gnananand Swami thinks of the persons heart, then it is sacred. For millions of Vandan Ho such saints,