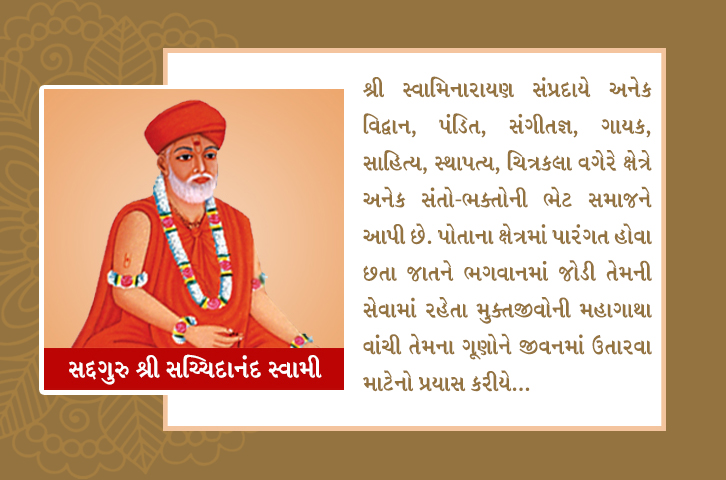 Despite being the Aishwarya-Goddess, Gadhpur Radhwadi was a Kshatriya of Vaghela by the native and caste of the village "Moda", near Jamnagar, the idol of Lord Murthy Sachchidanand Swami, who served Nitya Maharaj with new flowers. The gigantic work, the shadow of the shadow, the sound of the whole five hands high, the original name of this saints name was Dajibhai, but all the families were called by the name of the Grambhai by the name of the hood.

Though Sadguru Sachchidanand Swami is able to reach all the achievements of the world with Aishwarya Rai, Swami Bhakta is considered to be inferior to Aishwarya on love and to remain mad in Lord Prem. The family members do not like the love of this love, so they behave in such a way that they are like a hard-hearted person. The elder tried to put the sticks in the foot and tried to break into the room. Maharaj darshan, by breaking the bars and taking Gadppur and initiating the name "Satchinand" Swami named. Since then, Swamy has seen the statue of Akhand Maharaj in the three states of the Akhand. They did not even tolerate the dissonance from them. If Maharaj calls him "Aasoschichandananda" with love, then the universe will be destroyed, my lord called me with love by my name.

Lord Shivaji Maharaj asked him: "How do you love me?" When Premchumrti Satchidanand Swami responded, "If you give me a devotees hand in the court, without any reason, he should break my knees or dhunana But you or your devotee does not have any problem. I can not even go out of the food collected by the devotees of saints, because there is no other God without you. I have no need for my welfare.

Despite his service to Radhavadi, many of his Aishwarya leo is famous. Hey! Once upon a time, Lord Swaminarayan, who was sent to Shreeji Maharaj and Shri Gopalanand Swami, to give his resignation to the devotees who returned to the country. The pestilence penetrated into the body by prodding a fire. Gadhpur, on the sugar cane fence, bavo nadigmunded by the trick of raw cotton in front of the Almas Baavas.

Many such Aishwaryas were shown .. But not to increase the mataai. His mind senses remained lonely in Maharaj in three stages. When Shriji Maharaj went to Dharampur then he went to Talai with Swami. But also, he is the owner of giving food to the thali. Thakkar Hariji was not ready to believe this, but Swamy said, "Maharaj, I have eaten the one who gave it to Dahi-Bhat." When you say vomiting and leave the insistence of saying it.