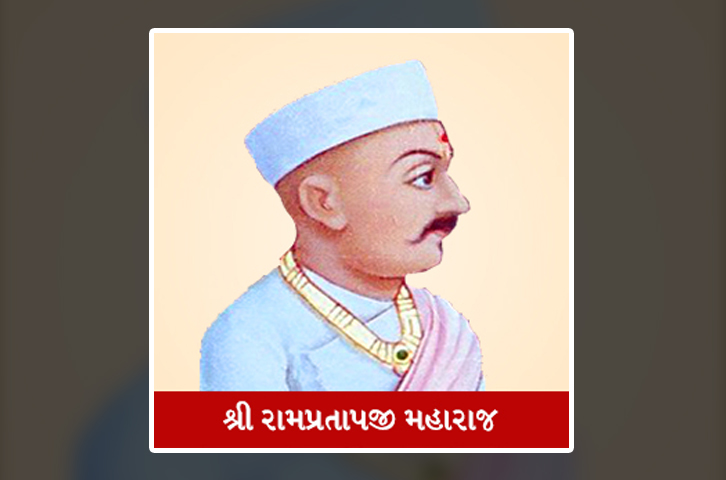 Lord Shree Swaminarayans elder Bandhusri Ram Pratapajibhai Kirtan was the emperor. Gavgad keenly remembered countless songs and praised Govind. The body was high, but it was hot, but it was parmatakapura. Shree Ram Pratap Bhat was born to Dharmadevs eldest son, V. 1818 Shravan Sud Ashtami was born on Chhapayyadham.

As soon as the king-king is in power, the first receiver comes. When the entire man Saramshi was staying in his house, his chest was as a serial in the form of Shakshatra Shisharnarayan Shriram Pratapaji. His childhood spent much of his mothers house. His marriage was with Chavapaiya, along with the legendary Suvasini of the legendary scholar Brahmin Bhaldev Prasadji who came from the three directions in the west. Suvasinis daughter had a lot of laughter with her childhood friend Shringhanasamy along with Mother Krishna. In Shreeghansyamyallilamritasagar, many of the elder brothers and sisters of Bhabhi have been described in a panoramic style.

Shree Ram Pratapaji was the elder brother of Shree Hari and was 19 years older. Dharmadev Swadhama Siddhavya means that the child-brother Shringhanshyamamaharaj accepted him as Father. Despite his deep affection and unwavering emotions, Shrihari gave happiness to 11 years of childhood and gave sudden happiness to the forest. After 8 to 8 years, after the Taya, the first festival was held on the occasion of Shakotsav in Loyadham. After that, the son came to Varatal with the family and stayed with Nitya Maharaj. Ram Pratapguns bungalow is still in Varanasi today. A special arrangement has been made for the Ayodhyas Jaigaon in Gadhpur.

After living with Shreeji Swadham, he spent the rest of his life in Ahmedabad, even when he came to Vadtal, Sri Sri Rishi Shree Maharaj came to his elder brother. Knowing him wearing his necklace, can this be the highest devotional achievement? He was a big brother and sometimes he used to reprimand Shrihari, but he also gave reproach. But it was his humble green. The fluid flow of their love guru flows to Shrihari. His son-in-law Ayodhyaspradji stayed for thirty-two years in the post of first patron of the post of Shree Naranayana Dev Peth.