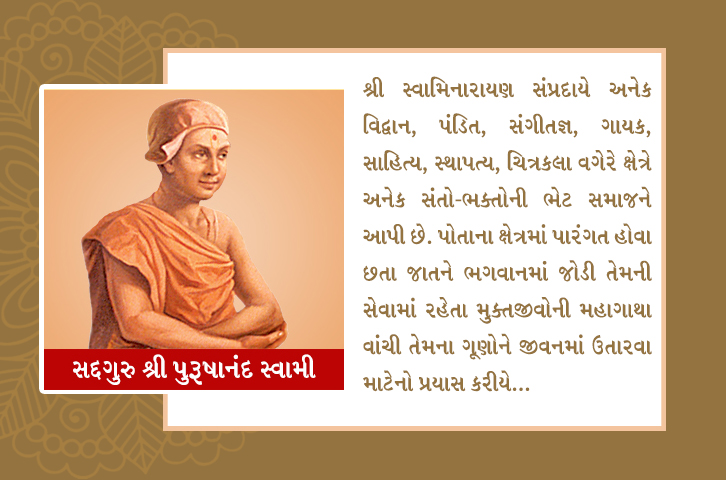 The Sant Varave had served many times in Junagadh and many blessings were born of Swamis blessings. Jogi Mananand Swami of Junagadh was born in 1878 in "Bhiyavadar". It was O Audicya Brahman. His fathers name was Devakrishna brother and his own name was Ramji.

Vairagya was produced by Swamis association with him. He was not able to attain Sriharri by staying in the heat of the worldly life, so he fled to Junagadh, but his father went there from there. Going back to Gadhada, I went to Varalal and talked to Gopalanand Swamiji that I have to dedicate my life to Shri Hariña Charan. Then Swamy says, after five years, your wife will die after being renounced. After five years, after Swamijis command, Ramji went to his house, according to Swamy, when his wife gave birth to his body, he was in Junagadh and there he got news that when his wife died, the words were sung from his mouth or the relationship between the world was broken and now the relationship with God happened. Shower yourself and fill the sugar with the saints. When all the actions of the wife came to Gadhde, her name was Shriji Maharaj, Mananandji Brahmachari.

He became a disciple of Gopalanand Swami and stayed with Swami for eighteen years and served him, so by his grace, he used to get samadhi and Samadhi to others. They were able and able to achieve the promise of a saint.

One can read about their event in the history of the community that once Mananand Swami drank water from his calf after going through the hands of Gopalanand Swami and Gunatitanand Swami to feed him. Then they are known as "Mahapuruashadasiji" Swami. He was the incarnation of the Marcade Rishna. They were the promise of a promise and a capable saint. From Swamis blessing, Rajkaviji Bhimjibhai was born on the birth of Maha Bhaktaraj, like the poet Shri Mavdanji and Chaturanji. The poets maternal grandfather described the glory of Swami that,

The Gopal Muni, the master of the Gopal,

The grace of the Swami has become pleasurable by avoiding the suffering of many Satsangis. Jung of Junagadh was published in satsang.

Sree Satyarthi, a devotee of Lord Hanuman, who was blessed with an eternal statue, became a person in Jagdhani on June 5, 1930. Lakhs of Vandan Ho is the legend of this legend.