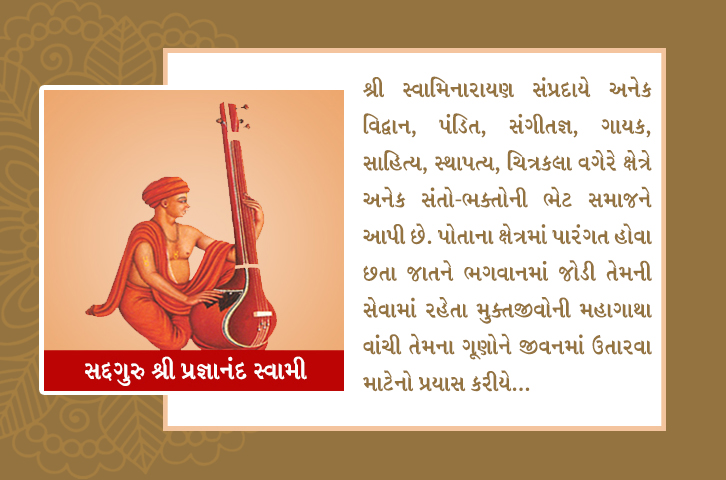 Many brilliant constellations were decorated in the Virat Nabhos Mandal of Maharaj. In it there were many bright planets in Nityanand Swamis congregation. Of which Prabhagan Swami had made Bhagvaduduragi, selfless, liberal, and some kind of cruel nature, made humans worshiped.

Pragyan Swami was from the village of Kainthan. Many monkeys were exposed with the curse of mischief in Menthan village. 13 nandasantras were formed from Manthan village. Therefore, Maharaj was very affectionate towards the devotees of Methan village.

At one time, Shrihari Mightan came. There lived a lover of Shriharri, named Hariji Patel. He had two sons named Jivrajbhai and Pethubarbhai, and Piyansabrhai was a gentleman in them. So he had a son. But they were immersed from the worldly life and were devoted to Maharaj. So Shreeji Maharaj gave a good name to his "Pithabarand" and gave him the divine initiation. In time, his son also felt invincible desire to become a monk, so when he expressed his wish to go to Shrihari, Maharaj said, "If a lion has a lion," then Maharaj accepted him by adopting "Prabhagan Swami".

Prabhagan Swami was a devout saint. He spurned his life like Chandan in the satsang propaganda campaign. This life was enjoyed by the blessings of Lord Maharaj. Since there is no information about Prajnand Swami, there is a mention here.