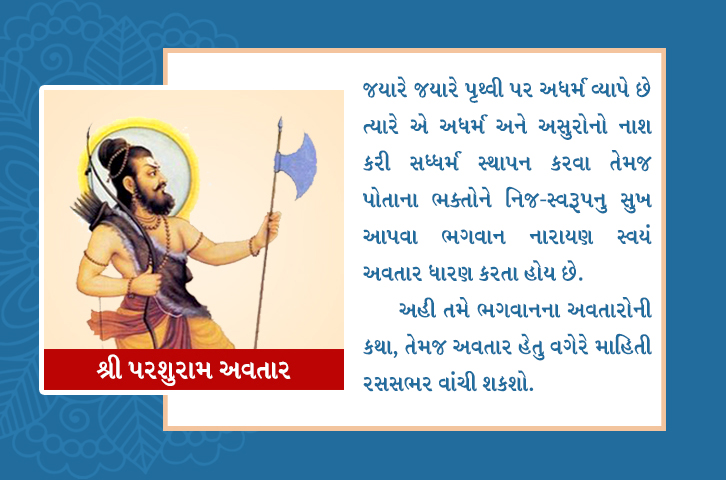 Parshuramji, the devotee of Lord Brahma, is a fiery pratibha. He was born on the night of Vaishakh Sud-3 (Achitaj) in Bhiguvansh, by his mother, Renuka Devi, in the ashram of Jamdagni Maharishina Ashram.

Parshuram went to penance in the forests of Himalayas after obtaining the permission of Jamadagni, the father of the ashram at the Narmada coast. There he attained mastery of Gurudev Agastya Muni, in many weapon projects like Brahmaastra, Vaishnavastra, Rautradhasta, Mohanastra.

On this side, King Sahasrarjun came to the Fathers ashram at the feet of Pratishtha Shakti. Jamadagni honored his political status by believing in God as part of the Lord. Vatra army, including all the people. Then the king felt sad. From where so much wealth has come in the cottage! The answer to curiosity was that of Kamdhenu ..

The king ordered instead of a cow, let me give it. Rishi did not say that after taking army, he took the work and demolished the ashram. Her lips got turbulent after receiving a tearful son from the news. He invaded Mahishmati to overturn his fathers objection and finally destroyed the Sahyadraganj with a Akshayhini army. Relieve the earth from the burden of the sinner and bring back the work of the monastery.

Father sent them to penance for a year in penitence. In the meanwhile, sons of Kartavya Sahasrangarjuna killed Jamdagni to revenge their fathers murder. Parasurama, who came back to penitentially, gave twenty-one (twenty-one) times to the world for the misery of the miserable husband. Thus, by taking Parashurama, Lord Brahma liberated the affected land of sins of the monarchy kings.