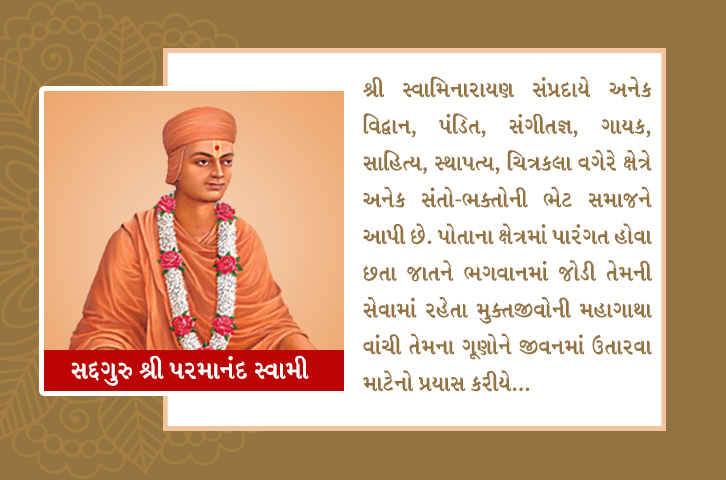 Through the spirit of selflessness and genuinely philanthropy, the Mahapoorus constantly seeks the credit of his soul by pitying them on the souls. Parmanand Swami of such a Shramayak was the chancellor of a village near Lucknow. He felt strongly that salvation of the holy Tirtho and Lord Parayana Mahaparuji proved to be the achievement of moksha. Also, in the Ramayana, the story of Kagabhasundi was read, so I decided in my mind where to go to the place where there are saints like Kaug Bhusundi, I started thinking of going to Tirthatam. He came to the shrine where Lord Ram Swaminarayan had passed away in the village of Jitpur in Saurashtra.

Parmanand Swami had ear ache that night was heard in the house, so no sleep would come. Sometimes it comes a bit napra. I did not have a nap for twelve years. But after eating food for the sake of food, the sound of the sound heard in the ear immediately stopped. And there was a good nap. The pain in the ear has disappeared. And there was a lot of peace. So long time sleeping. Ramanand Swami said to him, Sadhraam! Worship Jung, what are you sleeping?

Divided into nine parts of the world,

If you do devotion then do not end it then you will end it.

Wake up immediately after listening to this Then he fell at the feet of Ramanand Swami and said, Due to your vision, my disease has died and peace has disappeared. Then he told Ramanand Swami that he should give me a sudapadesh. Make me a spiritual monk. After Taira Ramanand Swami gave them the name "Parmanand Swami".

Ramanand Swami, after knowing the manifestation of Shreeji Maharaj, after performing the Divine Lord Swaminarayan Parmanand Swami, made the great devotees of the temple of Gadhpur and gave a request to the Dadas house and filled them with blessings and gave blessings to Swamiji. He would not give you any money. After that, the Swami served ten years as the chief of Gandhapur temple.

After Shreeji Maharaj went to Dham, Swamiji became like a chit illusion. So there was instability of the brain. Gopinathji Maharaj paid the salaries of putting the northern pledges of the Maharaja. Gopalanand Swami was aware of this, so he recommended the administration of Gadhpur by calling him Purna Sheth, son of Himmat Shah, Vertal. Puja Sheth took over the command of Gopalanand Swami and took over the administration of Gadhpur temple for ten years.

After that, the devotees of Lord Swaminarayan left the place of Lord Vishnu on the night of Shravan Vard 6, 1909.