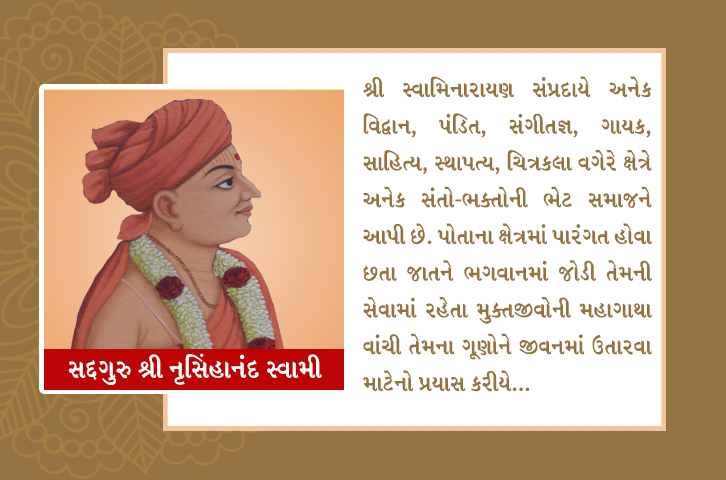 One of the brightest temples of Sriharris five hundred pilgrims was a resident of Ayodhya, Nrusinhanand Swami. He used to serve Ramchandra Bhagwan in Ramji temple for twelve years, assuming the rule of Thakorji. At that time, a Vairaggi traveled to Dwarka and came to Ramji Temple. At that time, Prakruts name was revealed to the light of the temple. When he slanders, the light stops. It has been lighted four or five times and stopped.

Nirasinhanand Swami got the idea of ​​seeing that light, which means that the name of the divine light becomes a must, then it must be God. For this, it will be in vain if it does not attain God. Nirasinhanand Swami left the service of God to other ascetics and walked there. They came to Dwarka rather than pilgrimage. There he saw Ranchhod ji and asked people, "Is there any big male here? They said that Khatri Khatri is a Satpurush in Mandvi (Kutch).

They met Khaaya Satpurush. When asked why did he take a sage Ram akhakh? He said, "I have come to you to know God for you, to receive God. Show me God for me Then he said, "I want to show that if a person wants to be a Niraka Brahman, but if he wants a realistic Brahma, then he is in the house of Gangaram Mall in Bhuj.

Then they went to the house of Gangaram Mall in Bhuj, and after seeing Darshan of Lord Shrihari, there was a Samadhi. Sri Darshan is seen in Akshardham in Samadhi. Waking up from Samadhi, he bowed down to Shriharri and said, "Maharaj! You smile My human life was successful, now make me your monk. Then Maharaj initiated him and gave him sudhu and named him "Nirasinhanand" and stayed there with Maharaj. "

Once upon a time, a fight has started in Sri Sri Singhand Swami Phaliya. At the time when he was in the bullshit of the bull, Nirasinhand Swamy came to know in the mind that if the bull would rise, then he would not have died, so Lord remembered and the bowmen ran away after listening to Lord Swaminarayan. He swept the Swami against the horns of the bull. Then Swami says, "We will go to the dump of this bull. Will not have to be born again. "

Nirasinhanand Swami was such a devotee of Goddess Nirmalas, devoted, devoted. By enduring many sorrow, they started preaching satsang in faraway remote areas. In last state, living in Gandhapur did life.