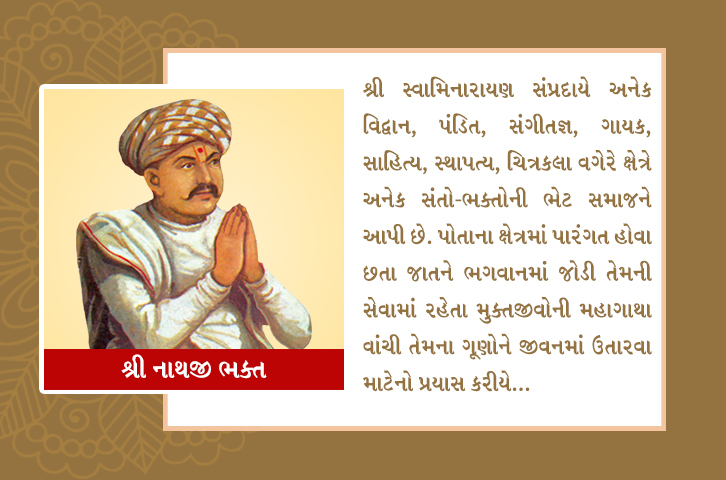 Without mentioning the history of his name, the ancient history of Vadodara satsang was a unique devotional devotee of Shrihari who remained incomplete. Nathji Bhakta The devotee has made his life pure and clean by giving many ordeals.

The best-known artist Nathji Bhakta is a textile business. Specially offered by the Rajeev, when selling fine clothes. You will not take this piece of clothing for Shajiji Maharajs decoration. As a result, Maharaj was getting the royal suits from Vadodara.

Once Sriharri sent Pandhar to call the Nath devotee, who came out of gadhapur. He met Vadodara at the bridge of Lord Vishwamitri. When he gave the order of Maharaj, the devotee went to Gadhpur back from there, although the house was very close. What a shock to promise. When Maharaj knew that Nathji Bhakta came back from Vishwamitri Bridge, he was very pleased.

However, he has sent an insufficient paper to test the devotee. A 16-year-old young boy died. Nath Bhakt received first class passing certificate after sharing his sons sugar as a celebration of Aksharus. When his wife went to the place of worship, Narasimha did Haribhana like me. When the devotee got filled in jail for satsang, he himself was given a glimpse by the devotees. When Gadhpur went to rescue the cows of the temple from there, Nath Bhakta was forced to stoop like a statue with a sense of devotion. He got the help of Agnas worship but he is also true and full.

Blessed is such a devout Nath devotee.