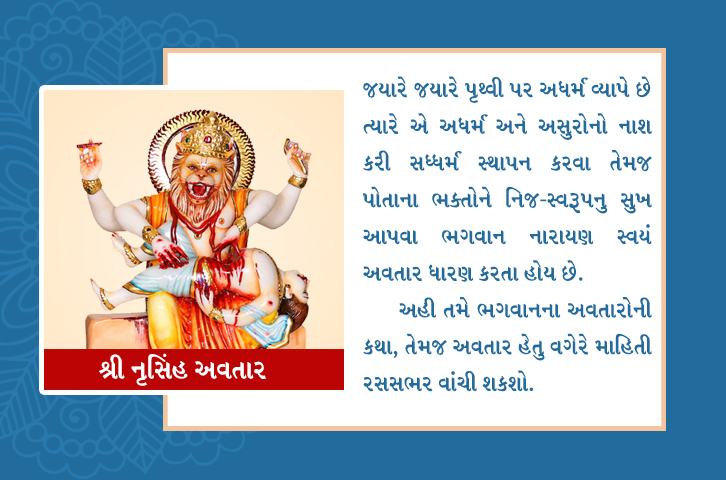 We call it Nirshinavarat, for the protection of the child, Shree Prahalad.

To defeat Vrahs god Hiranyaksa, his younger brother, Hiranyakashipu, took thousands of years of fierce sadhana to get rid of dry green, sky-earth, devanav, weapon-weapon, etc., in no place, and to be confined to triplets.

But when he was in intense penance, his penance was brutalized by Indra who kidnapped her wife. When he got Naradji on the way, he preached Indra and took him to a ashram. The person who was born in Naradas ashram had a deep impact on satsang and the child became a devotee of Prahlad. Vibhuti is considered as a God by the child in the Gita.

When a father asks Hironakshipu, when he asks Priyal for his favorite thing, he is called Vishnu. Despite the millions of efforts, the triple-winner, this demon can not give up his child Vishnus name. When there is no difference in the Shamdankars ashram, when there is no difference, after defeating the mountain, burning it in the Holi, crushing under the elephants feet, crushing under the elephants feet, when he fails, when he fails, he becomes furious and asks, Is Vishnu rescuing him in this burning pillar?

Bhakta Prahlad says yes. Then they are ordered to embrace. The pillar bursts with the touch of Prahlad and the name of God is manifested in the form of Lord Krishna. And by keeping the truth of all the blessings given to Brahma, God is killing it. And wants to apologize for the delay in protecting Prahlad.