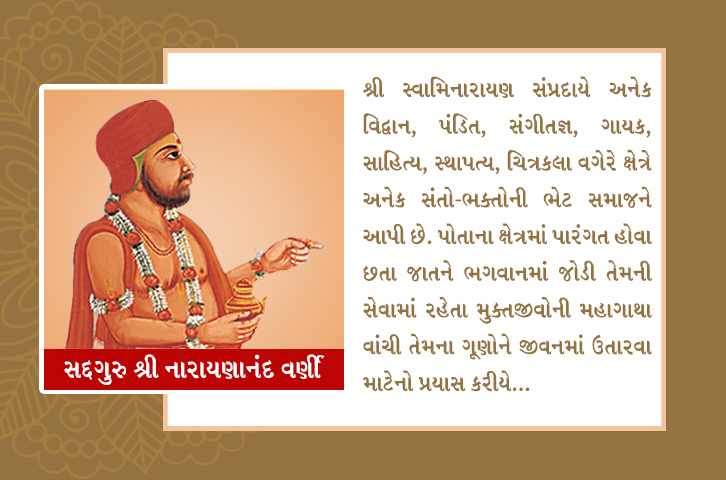 Sadguru Shree Narayananand who was the first and chief priest of Varalal Sri Laxminarayan Dev, was the chief disciple of Brahmachari Mulaji. He was born in the village of "Khasta" in the state of Bhal and he took the name of "Narayananand" by taking initiation from Shree Lahiri in Parna Dharni of Panchal in Darbargarh of Thakor Shree Jinnabhai. Through the service and intercession of Shri Muljji Brahmachari, he embarked on a lifelong lifelong service along with his consecration.

When Shreeji Maharaj made the first temple of the sect and worshiped Nararnay Dev Dev, he loved Shri Brahmaris for the service of Brahmachari in the service of God as the first worshiper. In fact, when Laxminarayanadevi was established in the Varanasi, Narayananandji was appointed as the chief priest in the designated celibates of God Seva.

Bus, VS Since 1881, Brahmachariji lived and lived in the Varanasi and recited the Ahnavas. With the service of the service also, in the year 1912, Shri Raghubirji Maharaj organized the Satsangi life of Chaturmas in Vartal, when the arrangements for the transfer of all the devotees from the nation and the nation were delivered to Narayananandji Brahmachari. Their service and function allowed the dexterity to become more pleasing.

Brahmachari Narayananandji is said to be called Rigveda in the Mahapooja. His service and grace of Srihari Krishna Prasad danced Saraswati with his tongue. When dealing with Vedic hindrances, while chasing the worldly life, Bhalbalas mind stuck in God. Brahmacharji used to flutter a fluent tide when Surat Kataragams valorous renunciation was done and his relatives were forced to come to their home. After listening to his heartfelt talk, all the three sages remained there and were renounced.

Brahmachari Shree Madhavpiyanandji, Brahmachari Shri Mukundprianandji and Brahmachari Shree Pithranchandji, all these were the sons of their puppies. It can be understood how much the oge in his speech is. Whenever relatives take it home, it is like the King of Delhi. There is a lot of work to explain it. When Narayananandji Brahmachari made three holy beings of Vallabh Bhagat not only, but three three sons of Vallabh Bhagat came to him, they also made brahmachari by stoning talks. What is more about his personality? On the day of Samvat 1920, on the day of Amas, Maharaj was taken to the das by giving Darshan to him.

Thousands of Vandanas are worshiped by the Brahmachari.