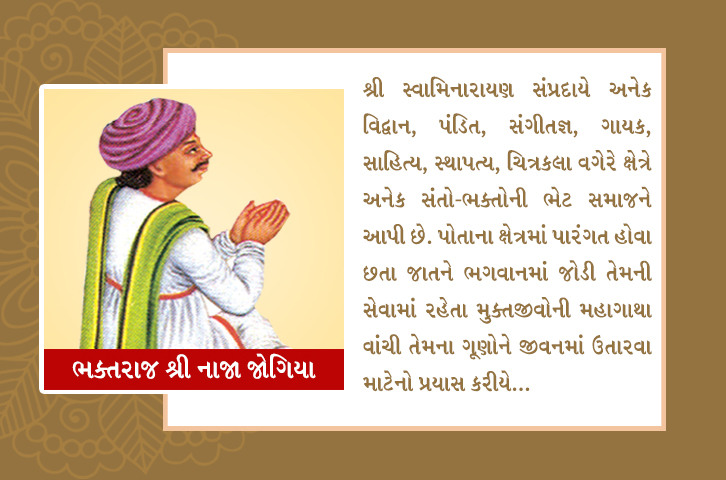 Najja Jogia has a prominent place in the unique devotees of Shreeji Maharaj who dedicated satsang to the head by dedicating tan-mind-wealth. Although he is a native of Sri Lakhanaka (Ta. Jassan), he left the village to keep the party of satsang, for some time after being frozen and finally settled in the village of Bhoyra, and living life dedicated to life as a permanent owner. In particular, he served Mari with Maharaj and when Maharaj went into hiding, Gupttvas were seen by Ramdutt Hanumanji in Nāja Jogīā and Nāja Jogia, after completing their intentions and enduring hardships, also searched Srihari and took him to Ghadpur.

Nirmal, sincere conscience, love and faith towards saints and Satsangas, Najja Bhakta has been placed in Shri Hariris nest. He was an excellent devotee who used to take his name. Though the caste was still slaves, he was a slave in his own way, and he became a brave and favored satsang.

Naoga Bhakta and Ram Jogia, who lived in the village of Lakhanaka, retaliated with the lanky googlya for their insult of the Saints who were staying at their home and left the village. This devotee has given shelter to Bhanlachchacha in Bhadli. But there was no peace, and the basement was stagnant.

Such a devout, once the great unpredictable disaster occurred on the devotees head. The King of Jasdan, Vajsur Khattar, has brutally advocated that if Lord God does not give visas to Lord Jagannath, then I will complete his sentence and will complete his sentence. Sri Lahiri learned this thing intimately and came to the basement from Vish Nagar. Bhanji Mehta in Vadhvana in the middle of the temple, when the pilgrims surrendered to Maharaj, Shriharri told them the promise of devotion to the worship of Nava Bhakra.

Over the rainy season, the Horse of the Bhogav ​​river crossed the ship and reached Sri Bhariyara and protected Bhaktraj Naja Jogia. Good faith knows this history.

Hey! Once upon a time, Maharaj slept with his head in his lap. What a devotee to God and God will be to the devotee! When the devotee got entangled, suddenly Maharaj passed on. Thal wet the ground, go out into the open air, do not relax in the village and relax. Go out and say sleep by seeing a cold air. By saying, "Najja Jogiyas bosom, sleeping shir Dhri shrihari there" "

Thus, despite being a slave of Najja Jogia, Shreehii gave him the highest level of happiness. During the secret of drought-like times, mystery and renewed secret was in Shree Lahiri Vartal, when in search of Shri Lahiri in search of the fortress of the fortresses. Najabhaktas tragedy has been described in the elaborate form of Shree Harililamrut. In that story, he has a document of his mantra worship.

Jagmohan Pagin made a tax there, and a devotee discovered Shree Lahiri from the hiding place. There is a taxonomist devotee to find Shree Lahiri, who is a taxman. After going to Shreeji Maharaj Dham, Raghubirji Maharaj named him Ghanshyam Das by initiating him. He handed over his heart to Harivar and said to Hazrat Vaibhadan Hazare Vandan who lived in the Agna of Abhayn Albela.