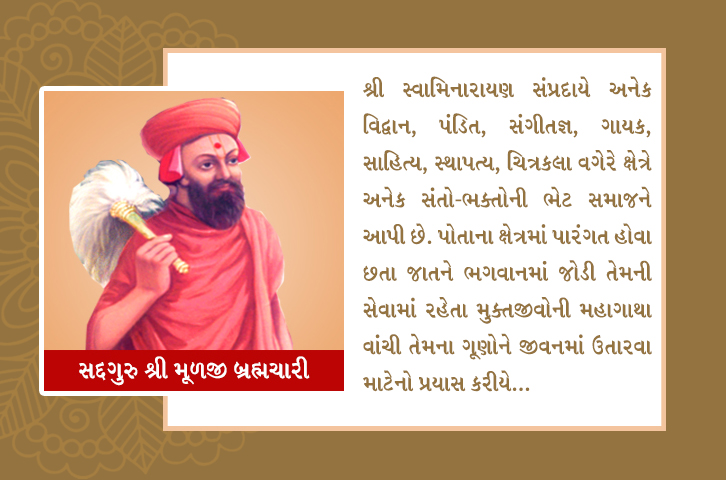 The true name of the service and the other name of openness, namely, Moolji Brahmachari Shree Muljji Brahmachari, who was a devotee of Satyagraha, who was a devotee of eternal life with devotion and devotion, did not know the child who was a follower of this sect. Mulji brahmachari was a servant of the servant even though he was a saint. But his yoga sadhana was unique. Without the form of Sriharri, there was no other resolution, it was his sadhana and that was his achievement. In three stages, they recite Shreeji Maharaj.

With the shadow of Shrijis Divyaakaya, he came back to a small village called Mukhiyev, Saurashtras childhood, after the childhood of Shri Muljji Brahmachari, who had made love for the place. There is no guidance available to the sect about the time when Shri Shree Saurashtras slow earthquake is accepted as its Karma-mantra. But it is decided that their karmabhoomi was "proactively". He was strong and very enthusiastic in his body. As a result, he became a Kripa Seva servant of Sadhuuru Shriramanand Swami. Originally, Brahmacharya took the initiation from Sadguru Shriramanand Swami and came to Shreeji Maharaj until he came to the throne.

Servant-devotee Brahmachari ji, from the time when Shriji Maharaj came to the throne, from the time of his ascension to the dham, Dasvatva had performed Sadayav. Shreeji Maharaj himself has received praise for his perseverance and his firmness of brahmacharya. He knew very well about Mr. Hariris heart attitude despite being very self-conscious. "Mukund is a Brahmachari, it seems like a fool, even then we know our nature perfectly."

Despite serving the nature of Shreeji Maharaj, however, if Maharaj conferred some examative punishment, he would accept it as "Yashishri Nirmirji". When Vishram Suthar saw Vishram Suthar in the heart of the brahmachari, he said: We should not have any servants who make our service to others. Going to Gujarat. Tharat went on to Guadpur after taking brahmachari Agna and went to Gujarat and lifted a basket of Dodhamani mango from Jaitalpur. After being in service again.

Thus, the life of Shriji Maharaj turns to life, as the life of the Brahmachari turns back. As a result, they received huge rajipos from Maharaj and Saints. In Vachanamrut, it has been recorded that, "God has such qualities as a virtuous person in Brahmachari." Thus, by the service of the Sampradaya, the fundamental personality of the origin of Brahma Brahmachari, which is a collection of godly virtues, provides a perfect way of life. Shriji Maharaj has praised him as a pair of Sahajanand Mulandanand. .

Along with the services of Shri Lahiri, he has also done a remarkable service in satsang development. According to the history chronology, all the works of the last plaster of Gopinathji Temple in Gadhpur were completed by the original Jalji Brahmachari. In the Samvat1904 = The Principal and the Muddhishanya Nandasant present in Jaljilani Samayya is called Brahmachari, Jai has told Lord Swaminarayan and said that the work assigned to me by Maharaj has been completed. By saying this, the letter closes in the room, sitting in such a Siddhanas, and doing regular work in the Siddhasan.