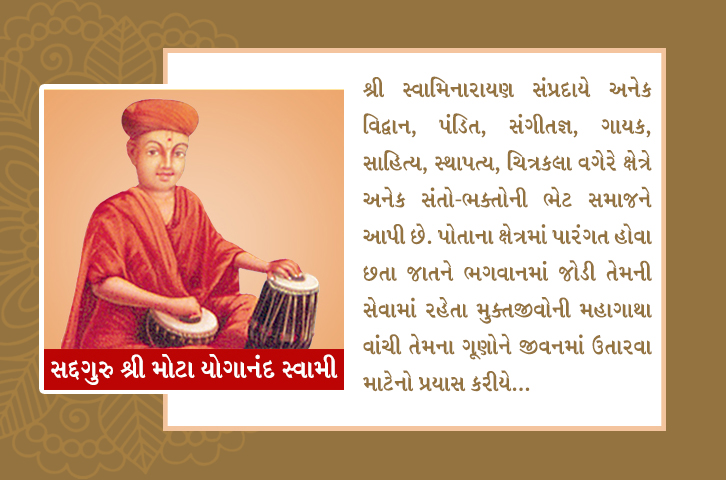 Saint Mahapruja was born as a teacher of one Ada in a cult and a saint subordinator of the Kathis, who was born on the day of Samvat 1841 Chaitra, in the village of Golthar of northern Gujarat. His fathers name was Ranjitbhai and Matajis name was Rupvati Bai.

If you get everything in life, then can you get Paramatma or the mind? To get the answer to a question raised in his childs mind, he gave away the worldly life to excuse himself from pilgrimage. Moving in search of Parabrahman, Kanabha reached near Ahmedabad. Like the air, the wide-spread glory of Sahajanand spreading his ears was sanctified. But in Kanabh, when the vision of Shreeji Maharaj came to him, mind-speech was awakened. The nostrils remain inaccessible and idols descend in distance. After completing the pilgrimage, the pilgrims started roaming behind the shrine. Shreeji Maharaj, in his valleys, initiated his prayer and enthusiasm and named him "Yoganand Swami".

Bhagwati Chandadi Pratap Bijayat Swaroop Saraswati on Swamijis tongue. They started singing in front of the Lord in the form of praises and prayers. Seeing the anticipated characteristics of the poet, Shreeji Maharaj sent him to Dholka to study Sanskrit. As a result of the study, he made Sri Ganesh to form a Sanskrit hymn. First of all, Swamiji created a Sanskrit hymn describing the formation of deforestation which was heard by Maharaj. Once upon a time, seeing Swarri, who was dressed in a beautifully dressed gurdha, Swamy gave a sermon "Jaldhur Sundar Madan Manohar". On hearing this, Maharaj was so pleased that he swore to his master.

Swami has created two scriptures in Sanskrit. Budharnjani and Questioner Sea . In which in the first volume, Swamiji has defined the name of Shreeji Maharishi as "Shreeji Maharaj" in 34 ways. There are answers to three questions in the second volume.

Swami had a unique magical power with Vaishudya. As a result, many Kathi Darbars, in the form of Khakhar, Khuman, have attained pure purity by presenting them through Swamiji. As a result, Swami was also famous as Guru of Kathis. Yoganand Swami has done a temple where Lord Shreeji Maharajs first Vachanamrit is written in Loya. Today, there are huge Naveen temples and schools, gaushalas, hospitals.

Thus, Yoganand Swami, after becoming a guide of many people, voluntarily left the body in 1902, at Jeth Vaidya 4, at Dhandkuka, at Yogasas voluntarily.

He is still considered in the great saints of Swaminarayan Sampradaya. Vandan at his feet.