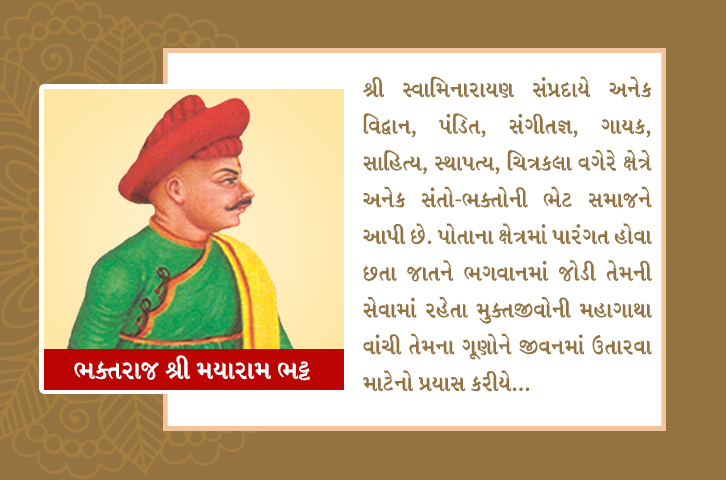 When he was young in a small age, like Narasimha Mehta, "Bhal hua bhanghi zanzalka, we did a good job, Shri Gopal." From the mind, the rest wanted to make a long journey of life. However, due to the inadequacy of the family, he believed in the matter of taking the advice of Saint Ramanand Swami in the center of faith. The Mahapuri agreed in the meeting where he took a vandan and took his place. "If someone asks me three times, I will not refuse to go back to fourth and I recommend it to Bhajan." Bhattji was a lifelong Brahmachari by answering Gurudev Ramanand Swamis words to his question, not only, but also with worldly interaction, and with the leading in satsang, Ramanand Swami Made a special character of grace

Sadguru Ramanand Swamy also kept Bhattji in every practical task, taking advice and suggesting. Swamiji also approved Bhattji while giving throne to Shri Neelkanth Varni. It is only understandable that Bhattji will be a devoted and faithful devotee!

Sathsangar Bhattji, with deep faith and devotion, that Lord Ramanand Swami is a living God, was upset at the Samadhi chapter, but the immense divine power of Srihari drew the roots of all their doubts. As a result, Bhattji was revered as a devoted devoted devotee of Srihari.

His life was devoted to satsang. Even after going around night and day with Maharaj, eating myself made it. Sir kept up with the goods. Their piety does not inhibit form-devotion. Shreeji Maharaj had full faith and deep faith in him. He has achieved immense royalty by continuously serving. It was not surprising that the mind was walking. As a result, the service of sending the Agnas letters to Kanchori in the villages, without becoming tired of Sri Lahiris misery. But do not even expect anything.

Serving satsang at an absolute price Vivekananda on the feet of Shri Mayaram Bhatt, who resigned from Dharmanandan to live a simplicity of life, without undermining the expectation of least.