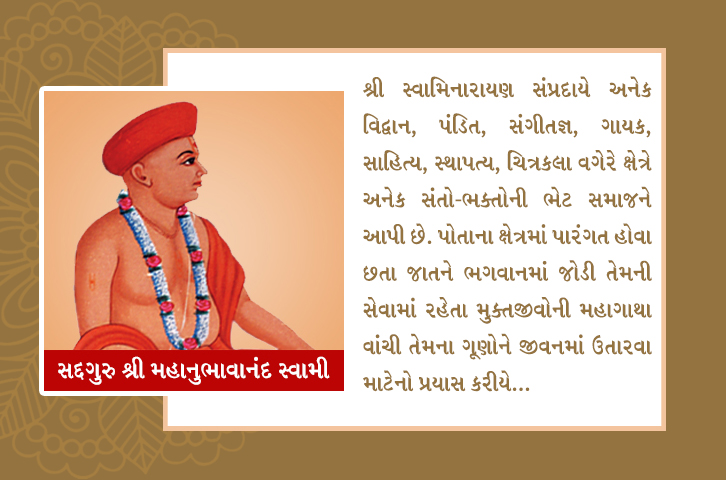 Sadguru Shri Mahanubhavanand Swami was a resident of Kadha village, away from Rao Gaou in Rau Gao village, who had made a huge service to the development of Satsang. At the time of his teenage years, he got the momentum of Vairagya; So the elderly Mahatma, who renounced a household, renounced the wealth of a woman more than the Tirthatan. Loved there When he talked about giving importance to Mahatai, he took out a scion of Dwarkas pilgrimage. Dwarka went on service with the law of unbroken worship for one hundred years. Dwarkadhyay darshan on the fourth day said: Go from here, you will get a real God.

They sat on the ship, shaking the command of Dwarkadhishi; There was a coincidence of Swarantanand Swami who came here in Jamnagar. When he talked about the real talk of Maharaj, he made a sound voice, "Hum Krsna Upasis Hai, Anya Shraya Nay Karenga." However, in Sai Samadhs view, the devotees went to the Samayas and renounced Survishri and became a saint by becoming ancestor. When accepting, Shriharri initiated him and named him "Mahanubhavanand Swami".

Mahanujahanand Swamy first recognized Maharaj and Maharaj also looked at his position. After going to Siddhpur from Unjha, he went to Brunei and gave the title of Sadguru to Swami. Mahanubhavanand Swami Vachan was a siddha male. He has temples in many villages, the lord does not hesitate to bring the sages to the haters of obstacles in satsang. When Swami Mansa came, Thakor Saheb came to the scene. When Swami asked for a place called the discomfiture of the Saints treasures, he asked for a reward in the name of Dewan. When we have to take the temple apart, we have to make a knight. Then listening to this, the Swami gave instant reward. Horseshoe! Ghodshala Hovegi Tere Gharman "

Just a few days later, when something went off in crime, Thakor took away the clothes from her and she stayed there and there was a horse. Many such occasions are sung in satsang enough to witness their service philosophy and promise achievement. Thousands of Vandan Ho on the feet of such a powerful saint.