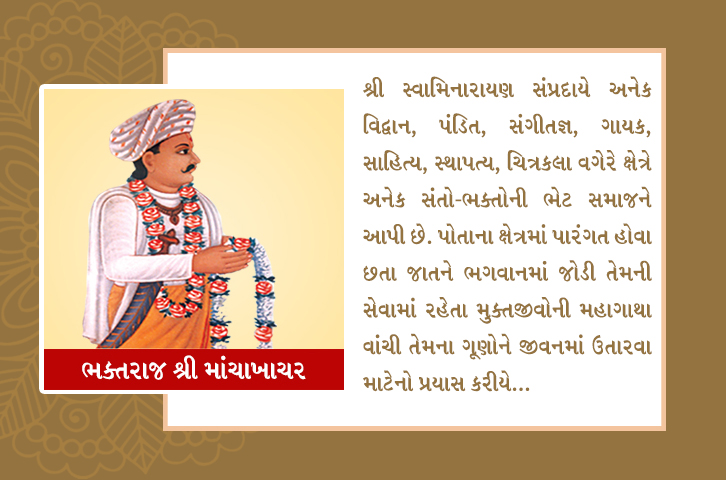 Even before the coincidence of satsang, there was a pious male, despite the village village of Akshakacharya Kariyani, the unrivaled Bhaktraj, who became the devotee of Garhpurwari and Akhandwasi Avinashi. Apart from falling into the tantra of mantra-mantra, classical rituals are performed by Lord Vardhanusar, performing Sadvrat.

There is a devotee who has performed Darshan of Sriharris favorite Kathi devotees who have first performed Darshan of Sriharri and have sent Shriharri in the court. In the year 1860, when Shriharri did summon the Mangrol Janmashtami, he went to perform a Manchacharya darshan. After seeing the vastness of the body, he came to the house with a disciple. The note of this event is taken in Harimalilamrut.

At that time, in the end, Pekheya Lord Pratap Apar.

Shreejis knowledge of the worldly life, during his disciple,

Keeping the faith of Lord Maharaj in Mangrol, till the death of the deceased. In the second year, the festival of Janmashtami went straight. After returning from there, this Bhaktraj gave splash of devotion to Lord Ram in the heart of the fortress. Maharajs heart stared at his heart. The priest came to Kanchani when he promised, "When Shreeji comes to you, you will get your help."

Shreehari Kariyan was completed by completing Chaturmas in Sardar. This devotees devotion was felt like a home there. After coming to the throne, Shrihari performed Suryation of social service from Kariani. Hiding the thirst of millions by digging a lake. On the occasion of the Pankit Purkharmachar, he made his entire journey towards Shrihari. Sriharri made Vishnuyag the first to use the substance of the matter. In the year 1861, a letter from Kariyani came to the fortress of Darbar in the Manchchachchar, in the first Darshan of Sriharri, to the fortresses of the fortresses.

Once upon a time, letter from Shrihariri Ghadpur came. Get the letter immediately after receiving the letter. They stopped at the time when they walked in worship. You will be ready for 200 yards of cotton and you will get mixed up till it comes. Slip it there and go. What is the response to Arista Khachar? In this way, the march went to the shepherds and said: "Put the goats of village-pragaam in my farm tomorrow." Just go and go to Garhpur in the cotton field. Such was a non-temporal devotee.

Hey! Not only the objects, he also renounced the family in the direction of Shriharinis eyes. The first name of this Bhaktraj was that of Shri Hariyas who performed 18 Parmahans. ("ManchasurasomalaAlaiya.") Veerdas Patel went to Vadi and put a letter in the hand of Machchachchar, where he called the potter from there and Bhagwan went to Bhuj without going to the house wearing clothes. Shri Darshan of Srihari. Shrihari named it "Achinatanand". Keeping for a few days, they gave great happiness and ordered to go back to the house.

In this case, after doing vow of brahmacharya, the life of a satsangaprayana took care of their gurus. When this distraction got disturbed and redeveloped by the loca planet, the march was thrown open. He went to Garhapur Maharaj to save his life and pray to explain the uncle. The Sreei Horse came to an emergency immediately. And the Agnas are in the worldly life but you are angry. After doing so, he sent the monk again to the village. Once done with a sadhu. However, once again the Agnas started going back to the village in Gujarat after being a sadhu. Blessed is such an obedient worshiper.

This Bhaktraaj, which was made from Acharya, from Acharya, was accepted by the devotees of Shree Hari, and accepted Srihari Nitya Sewa from the temple.