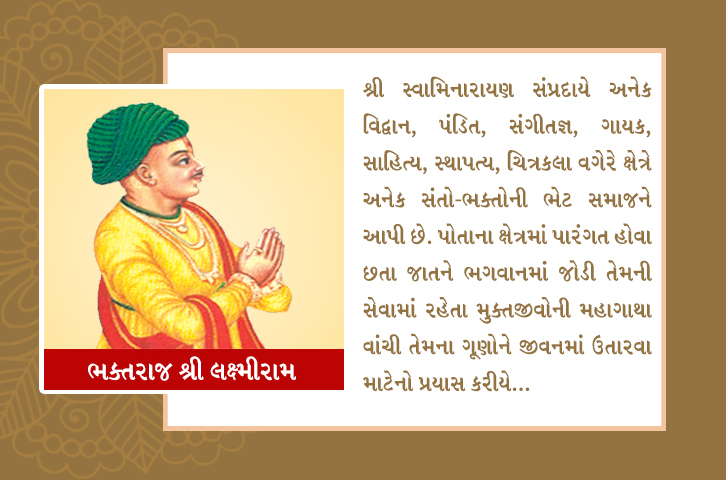 Lakshmiram village was a resident of Rohshhal. He was a Brahmin. Shreeji Maharajs very unique devotion and devotion to him at a dedicated price. Though he was poor, his heart was vast like a sea.

Yagna started in stagnation. So Lakshmiram and his friend Anandji Vaniya decided to go to the Yajna. But Laxmiram did not even have a code load. So he went to the shepherd of the village Hajo Gamarra and said that I have to go to see the yagna of Maharaj and the dashan, help me a bit.

Bharwade said: "I do not have anything, but my house-sized silver bars are worth staggering. Then Lakshmiram took that cloak and plundered Anand and took seven rupees. And he dedicates the capital of seven rupees to Shreeji Maharajs feet at the cost of destroying. When Shreeji Maharaj took the rupees with his hand, he said: "Aanis sacrificial sacrifice will come to an end due to the absence of knowledge."

Lakshmiram and Anandji came back to their village after the sacrifice was done and Lakshmiram came home and brought Anandji to Chandulal, and Anand gave him a rupee as a dakshina. Lakshmi Rama sells one rupee texture and sells it now. He had eight thousand rupees to collect from doing business. So he gave Gopinathji Maharajs service to the temple. After the disappearance of Shriji Maharaj, the life of Gopinathji served the temple of Shri Maharaj. As long as the temple of Gopinathji Maharaj is blown away, the glory of the service dedicated to a great devotee like Lakshmi Ram will remain in the gagan. But in the same way as Srishti Sanjivan, the virtues of their service and devotion, the satsangs will be able to give inspiration to the society.