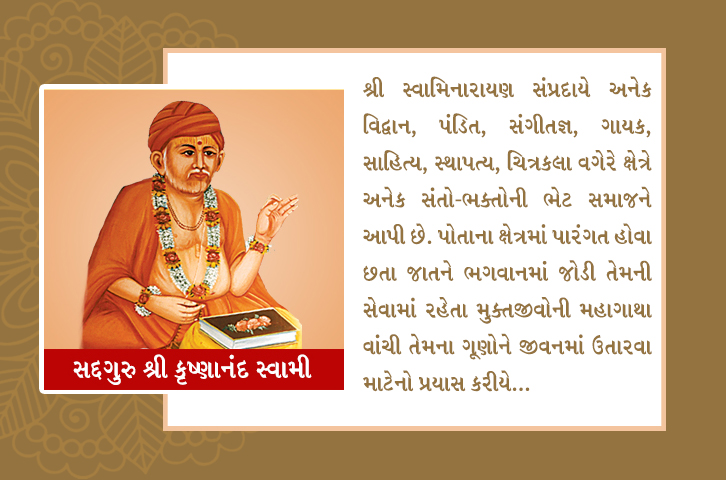 In the Swaminarayan sect, there are three saints in the name of Krishna, among the contemporary Nand saints. Manjoo or Shantan Swami writes in "Nandanam Garland".

Krishna sends a large saint, anahoni, and keeps distance from him

Krishanand would become another guru, Krishanand will do the trunks on the third

However, SG .Apartnerand Swamited "Shree Haricharitramit Sagar" has more than three Krishanandas. An ascetic is mentioned in the name of Krishna and in the tradition some SG Babhiracharya Shri Achintyanand Varni is named as Krishna Swan.

There is little information about Krishna Pranashrams predecessor. He was born at Parmanand Vyas of Udichi Brahmin caste in the village "Ranpur" in North Gujarat. After childhood, due to the sannyasin of the East, being inspired by the vairagya manifested in nature, he adopted the renunciation of his father. Shreeji Maharaj has initiated his initiation and wrote himself "dead in Shri Harichrita"

Shreeji Maharaj himself gave him the name "Krishnaanand"

Krishanand Swami was not only a poet, but a good singer too. Contact Us In 1883, when Ichkhaaram Bhai went to Gadhada, when Shreeji Maharaj asked Krishananand Swami to sing the Kirtan written "Goddess Pratishthal" written by Brahma Muni in Dada Khachars court, and Lord Agnar was pleased to celebrate Krishananand Swamiji by singing a kirtan in the meeting, Maharaj was pleased. So Shreeji Maharaj was pleased and gave his prasadini costume.

Shreeji Maharaj led a poet Krishnaanand Swami to teach the poetry classical scriptures to build a scripture. He writes in his book that,

Like the words of Purnaman Swami, "Vandu Sahajanand Rasputra" etc. Krishnand Swamy also has four portions of Poets poem, which is considered to be an idol of the limbs.

The poet Krishnaanand Swami was very affectionate towards Maharaj.

Vandan in the footsteps of Krishananand Swami, who kept satsang Vatika in the process of preaching satsang this life.