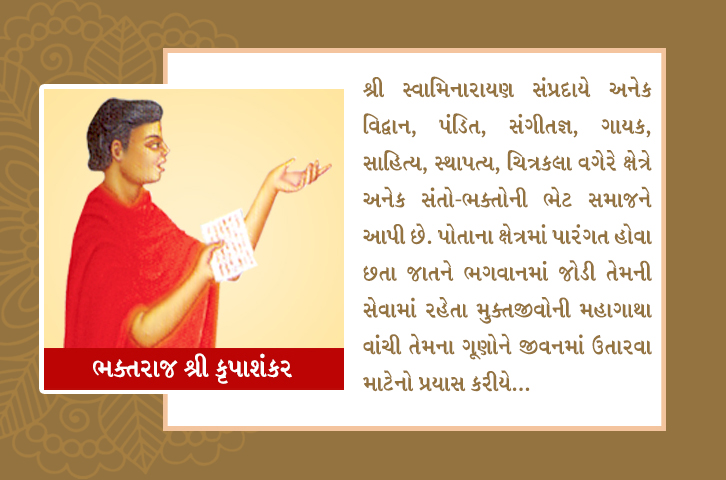 Vipravarya was one of Wipro's favorite Wipro of Karishankar Maharaj. He was a native of the famous Umrah village as "Chhati Kashi". Prahashankar has come to be different in all Brahmins. Because their life was very simple, simple and bhagvanithi. In the Gods, natural pritihova had good qualities in him, Vinay, Vivek, Dhaira, Atmamnitha etc.

Shreeji Maharaj was pleased to be the main Brahman in the Yadvadyi ceremony. He was appointed in place of Brahma in the sacrifice of Murthy Pertihatha in the Varalatal. Vihari Lalji Maharaj has written in his Harilalamrit that,

"Shankar was the same scholar, he devised his brahmana"

Raghubirji Maharaj was seated on the throne. After this, Raghuvirji Maharaj first took the food cooker in the Vartal with the order of Shriji Maharaj. In it, all the brilliant teachers were invited to make a suitable cook for Milk in the festival of Ankkoot. Shree Shree Shankarankar was also prominent, and he served the food. Do not worry.

Karam Shankar, in a unique way, remained a devotee of Shrihari and served Satsangan as a devotee of saints and devotees, and attained a place in the heart of Sri Lahiri. For millions of Vandan Ho, this Bhaktraj will be given the Bhaktraj.