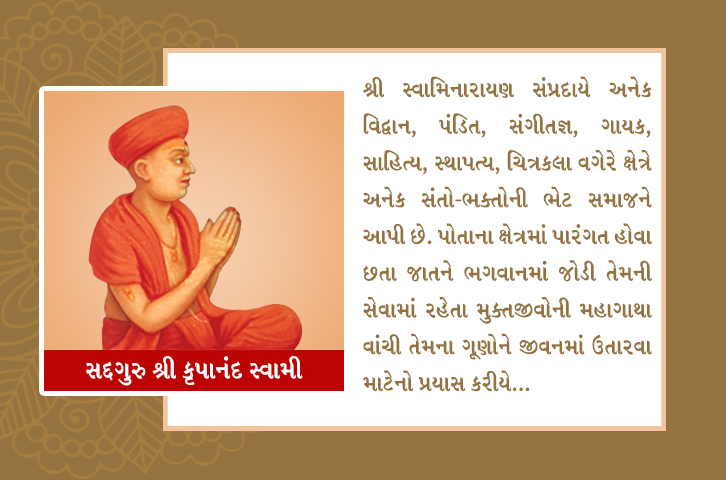 Kripanand Swami was a saint of beads in the bead of Sriharri, who found eternal grace of eternal happiness in life, by extending the blessings of Krupanand, giving many names of the holy souls, removing countless calamities and mental defects in the earth.

Listening to the divine power of Sriharri, people were drawn away from the countrys emigration and became dependent on Maharaj. In 1860, Shreeji Maharaj went to Bhuj town for the first time on the day of Maha Sud Sadat. Rumanand Swamis work was running there. Two vairaji Bava from the East country came to take bath. Shriji Maharaj devoured him with the help of Shiro-puri, so both the Vairagiri became very pleased.

Shreeji Maharaj heard the elixir of the elixir, and the two ascetics decided to stay with Shreehari for a few days. Because of the divine inspiration of the East, both the ascetics are adorned with Maharaj, and they are reconciled with the love of pratyas. He performed Darshan of the devotees by glorifying Sriharri in Samadhi and saw Shri Hari Aishwarya Pratap about Akshardham.

Once Sri Lahiri asked him where you came from, then he says that the Sarvariya is Vipo and he renounced the house in Balayvay and stayed in Jagannathji in Jagannathpuri. There came a brahmachari to the shrine. After killing the Brahmachari Varna, the ascetics of Jagannathpuri fought and fought together and we saved two of us. Bhuj came more than Tirthatan and got your yoga here.

Listening to his story, Shriri says that now you go to Dwarka. Vairagi says that you are only living in your stage. Now keep me yours. When Shreeji Maharaj initiated both ascetics, he named the name "Kripanand Swami" and the other Viragiris name "Veerabhadranand Swami".

Among them, Kripānand Swami was an intimate custodian of meditation. According to Maharajs interest, some saints have studied meditation, attained state of samadhi and realized the Lord. Keeping the order of Shriji Maharaj very comical. Once, along with Gunatitanand Swami saw a red cloth on the hill in the village. Fasting is known as there is a woman. He was a transcendent state, performing every vision of Shreeji Maharaj with his divine vision. Krupanand Swami had removed the demonstration of many people like Satan and made him a Bhagavat-lover.

Lord Swaminarayans vast renunciation disciplined community in the heart of Sadguru Krupanand Swamy, created a jewel of manmukukut, a jewel of Manigukutt, in the form of unbroken meditation, abandonment of compassion, devotion, benevolence and forgiveness.