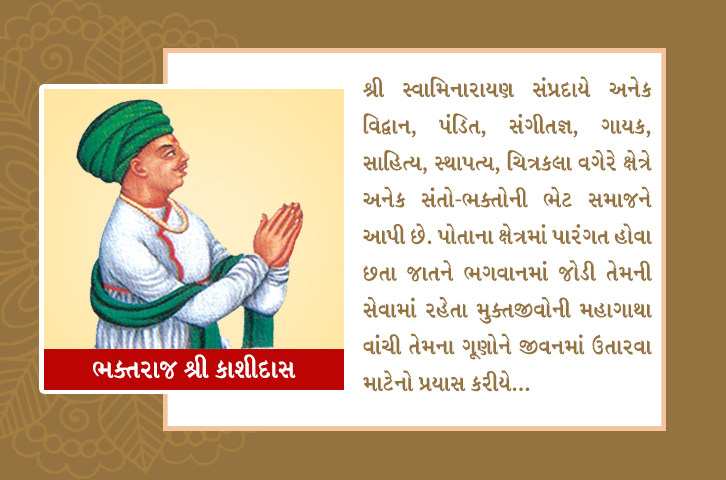 In the history of Shree Swaminarayan Sampraday, a devotee who had immortalized "bachasan" was Kashishbhai. All the members of his family were colored in spirituality. His father, Kanadasbhai and his mother, was a worshiper of the peacock. However, we know that we can distinguish between true falsehood and falsehood.

Kandasbhai was stooping Brahmins when Shreehari Neelkanth Varni was introduced as a bokshana. He got the Shrihari milk and rice in his house. Only then did the image of the word abound in Kashidass heart. At the time, Sriharivi Uddhav sampradayas padding and Kashidas got the responsibility of the house.

Kashidas came to Varanasis Samayya and prayed to Maharaj to take care of him. Maharaj took the bogusan. He ordered to remove the cottage in his garden. The faithful devotee, who is thinking without the orders of Srihari, used to cultivate sugarcane with the help of this sage. Shrihari has made a festive reception by Vadi. It is said that on that day the plane of Kashidas landed in Akshardham. Shree Lahiri Prasad has also been given the letter exemptions. Even today the farm is known as the airfield. Hey! Sitting in the gutted fire there, Maharaj extinguished his own hands.

Kashyadas was sentenced to jail by the businessman, who complained of business, but Maharaj defended him. Kashidas, after marrying his daughters daughter and taking a taste of Agnas violation, despite the nonviolence of Sririna, Kashidas kept the head covered by the small order of Sriharri. Blessed is such a Sahajanand devotee.