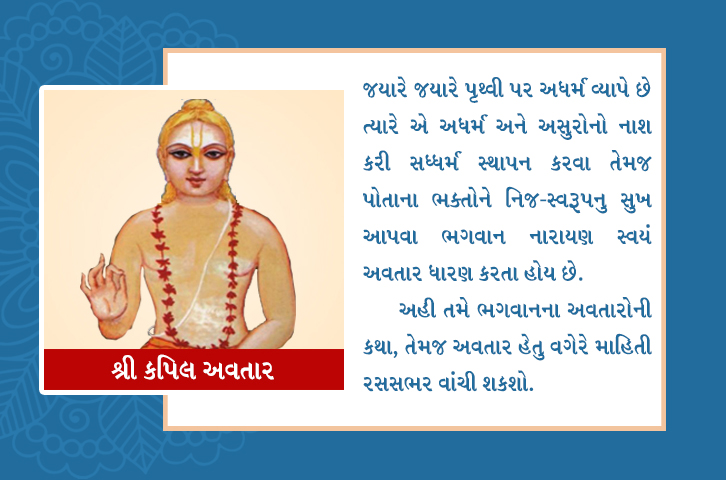 Lord Shankarpilji was born on the occasion of Sankhya Shastras birth, and he was born in the Kardam Rishi Ashram. In Swayambhu Manvantra, the devotee of Lord Brahma, Prajapati Kadamji, receives blessing from the father for his asceticism and achieves the right bride. Kadamjis wife is married to Manus daughter Shatruupa. Devhuti Vibhantra was a religion, so she considered to be a supporter of her husbands penance. After tetrarching thousands of years, Kardamji once asked the god Devthuti to seek blessings: He expressed satisfaction over his gratitude to the bride.

After that, on the basis of penance, they sat in the ultimate astounding astronaut and both of them made a world pilgrimage. At the Nija Ashram came in and joined the Home Office. There were nine girls out of nine, they had two daughters together.

After giving birth to nine girls, Kadam proposed to take the responsibility of sharing it with his mother. The mother Devhuti did not agree with her, and she expressed her desire to serve the elderly.

Both of them started their retirement God immediately pleased with the bhairamay penance and promised to manifest as a son. In time, the baby born to this couple was called as Lord Shree Kapil. After receiving the sons jewelery, Kardum continued to go to absolute position of worldly wishes but what will happen to me, what should I do? Such a question was asked by Mother Devhuti, son of Kapilji, the science of her answer is the same sanyas. This dialogue is known as Kapil Gita.

Kapil Bhagwan used to quote Sankhyasabha for the purpose of preserving the mother.