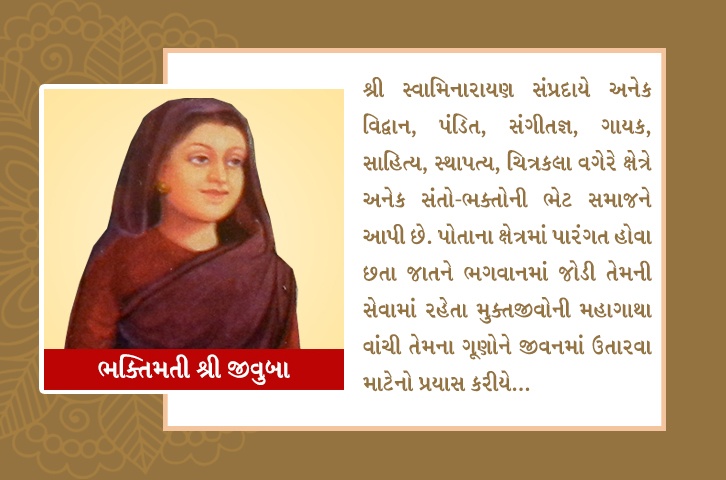 Lord Paramatma Parmatma Parmatma Lord Swaminarayan embarked on the love affair of Bhalkhachar family and stayed in Gadhpur after considering his own house. Jibbuba, a great supporter of that bellbapu. It does not even survive, but it survives. In 1841, he built a cradle in there. When the girl went to live, her name was "Jibboba"

Jibboa was very versatile and devoted since childhood. They love the Lords love. Jibbona took the first Darshan of Srihari and took it in the form of Harina. And Harvar decided to become a very intimate devotee. Even though Eblabapu made her married with Kadals Darbar Hadi Patgar. Despite getting married, leaving a worldly life and devoting life to a devoted and devoted life has given a good example for the Sankhayyasya sisters. The girls of Kathi Durbar did not go to bed after getting married, there was a miserable time. Yet, Jibus determination was steadfast.

Shreeji Maharajs fame and admiration were spreading everywhere. Then, by asking Singhji, Ladduad came to Gandhapur to take an examination of Shreeji Maharaj. Laddanji reached Garhpur to take a scholarship with the glory of beauty, beauty and Buddhism, but his aggravation of omnipotence was also omnipresent, Shriji Maharaj devoted himself to them! Yes, still the silhouette of silk wear or distance is not abandoned by the ego! Maharaj thought of a wonderful trick. Kaviraj said: Laduadanji, you are the treasury of Vidya. Explain this grandfathers sisters that the housing stay in labor so that we do not see bad.

If the poet tells the story, sitting in the court of Darbargad, sitting near Jibbuda, started talking to the laddus and gradually switched literal eroticism. By listening to everything quietly, Jibbuda spoke of the glory of brahmacharya, the scarcity of human life and the manifestation of Lord Yoga. The heart of the crying is heard. Poetry was defeated here and the philosophy of devotion was achieved. The spiritual life of the poet started and we got the gift of Brahmanand Swami.

Jigbo was known as the "bigba" in the sect. Shriji Maharaj praised his qualities of humility, sincerity, jealousy, and praised him as best among female devotees. Jibboa was kind hearted There were about one and a half hundred women in his court. And lifting full responsibility of the Yogyaksham of the all-Americans,

In the "Haricharitramatheeshasagar", Basantan Swami says about Jibbuba that the nature of Jibboo was good enough that the symbiotic surveys kept him greedy about him. Everyone talks to women in love with satsang. Speaking of himself had immense qualities. Never talk about it and do not talk about other Satsangi qualities.

When Shreeji Maharaj went to Akshardham, after making a trianghed-laden darshan of Jivubba Gopinathji Maharaj, the form became unchanged and he saw Darshan in the form of a true Saraswat Purusha Narayan. Jibboa attained Brahmans pace in the year 1916, at the time of Jeth Sud 6th, rather than performing such an inestimable devotion.

In Laxmibag in Gadhpur, there is an auto of life near Shreeji Maharajs samadhi. Even today, distressed women are urging Gadh Gaddah to get rid of Zububas heart, and Jibbuda also completes the mindset of the devotees.