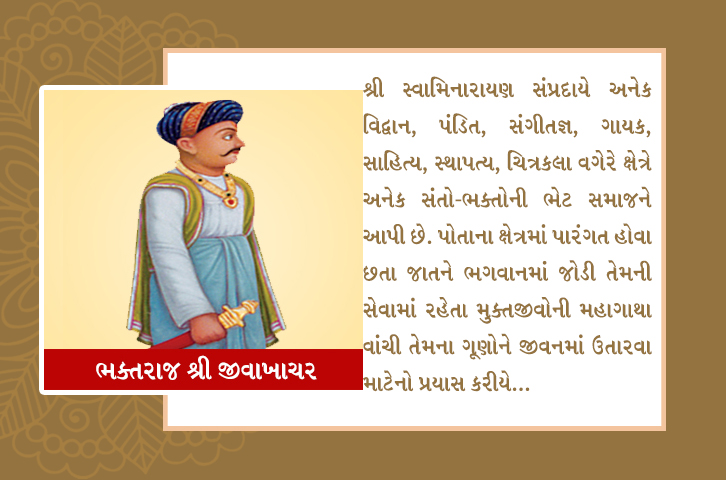 Wherever Lord Swaminarayan, the mighty God of Swami Swaminarayan, was speaking, where Lord Shree Kattabhenjan Hanumanji Maharaj, Padaravaya, was speaking at a time of the village of Sarangpur Dham, an ideal Gandhakta Shri Jivakhtcha. 18-18 Jivakhachar, who got the place of Vachanamrut with Vachanamrut, attributed his divine name to Shreeji Maharaj with his name.

After listening to the prayer of Bhaktraj Shree Jivakshachar, Shreeji Maharaj was sent to Sarangpur by hundreds. Living in his Darbar bastion and spreading the Amir streams of Vachanamrut. Having fun But there have been two wonderful festivals of "Janmashtami" and "Kanteshav", every saints poets from the sect have taken note of the Kirtan Grantho.

Once upon a time, Jivakhrit went to see the fortress of Shri. Since then, his mother-in-law has captured Harvars idol like a hull stick. Night and day, he rubbished the idol. That is why repeatedly having been standing in front of Maharaj and getting from Garhpur. Celebrating fun Maharaj went away from Sarangpur and went back and served as a shadow of biological law. That is why Acharya Shri Vihari Lalji Maharaj renewed him as Sarharis Majesty.

He said, Pranam, go to my village Ghanshyam.

Take with me saint society, my whole manorath today

The devotees of Shreeji, who took the jagruti of a jagruti in the village, were once loved by the Bhagwat Bhagwan Brahma. For months, the devotees prayed for reminiscent of devotees of Sarangpur, moving away from a distant land and praying to celebrate the colorful festivals of Bhakti. Javakhchachar is preparing. Today Maharaj became cheerful by seeing the enthusiasm of living and said: "To celebrate the festival, to be careful about Munajijan"

When the saints got the leaflet to reach Sarangpur, they bowed down and worshiped the worship of devotion and devotion. To fulfill the mind of his mind, Maharaj has called us to do Darshan. We are thankful to her. Where is the name in love?

The life of the living beings filled with Parabrahman and Paramahansa. Like the Kidyaras, the human community has come to this darshan. The color palatial outside the village. At the end Maharaj gave a "flagging". Saraye is famous in the tradition. (The Greatest Mayo You)

Thus, Jivakhachar took immense happiness by keeping Shriji Maharaj in his Darbar fort in Saranpur. Not only that, thousands of devotees, even those who have been blessed with happiness, are not satisfied at their distance. That is why once Srihari asked him for blessing, this Bhaktara Raja, Bhog, Sukh, Vaibhav would be stunned, if he dies, "When someone dies in my village, then he should not be able to sleep with him". He has given such blessing and opened the way for the uprisings of sinners too. . Vandan in such a devotees feet.