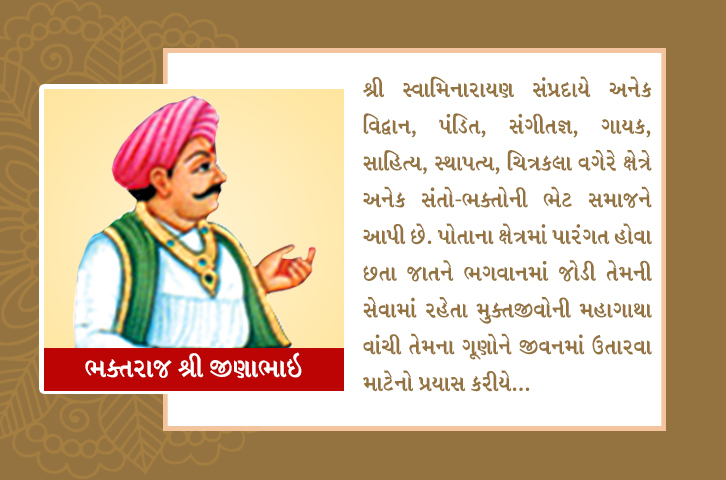 The famous royal Siddhraj of Gujarat, the descendant of Jai Singh, the Deewan of Junagadh and the village of Panchal, Thakor Shri Jinnabhai were a unique jewel of satsang. With the smell of dedication and dedication of the ancient Rasutsav and the deceaseds death, this Panch Panchaladham is auspicious. His father, Manubha Thakor, Mantri Gangaba, etc., was a follower of the family, Shri Ramanand Swami. As a result, in the month of 1885, Shree Hari Ramanand Swami was associated with the Panchal Nilkanthvarni.

As a result, in the time of the fathers fathers family, he became a descendant of Junagadh, despite being a resourceful and intellectual talent. At that time, we drank Bhagwati with Param Hansa and wept on the Ankhi Ankhi. The deeper yet easy-to-hear talks of the words have been strengthened by knowledge. As a result, the Tha-Thaikar in Junagadh Nawabs office of governance could not shake him. In the office, Dewan Zinnabhai also showed the impression of a man in the house of God and made all the faithful.

But Maharaj was worth crores of rupees more than Zinabhais mind. He tied his hand with Jagdish. That is why Srihrio liked to live in a village like Panchal. Hey! In 1879, Sriharri made an unprecedented Rattotsav with the prayer of Bhaktiraj Jinnah along with Fuldolotsav. Shreeji Maharaj played Ras by taking as many saints as he was. His divine vibrations are still lost in Panchals rich earthquake.

Though Jinnabhai Thakor is a Gnanis royal, he does not believe in satsangs and satsangis as well as his family. Once his beloved Adeeb has not given the medicine of headache due to ill-health of Satsangi Bhakta Laxmi. And when Zindabadi said, I am not a medicine when my goddess Bharti becomes ill and your brother becomes ill, then medicine comes. I am not your brother today, and you are not my sister. Thinking more than reading, how high a soul will be in their distance for satsangi?

Satsangs history notes with pride that when Kamlshi Vanya of Mangrol gets ill, three tax and fourth Thakurshri Jinnabhai; Four of them went to Khatla to go to Panchalalai from service to service and served them. As a result, Zainabhai got the privilege of receiving such a goodwill which was not received even by Shreeharis brother, Ichharmamji. In the year 1883, when Mahavid Tenth was done, when Jinnabhai renounced the transient body and joined the daily service of Srihari, Swayam Maharaj gave his life only once in his life and also gave a glimpse of Zinabhais name.

Thousands of Vandan ho such devotees are in the footsteps of