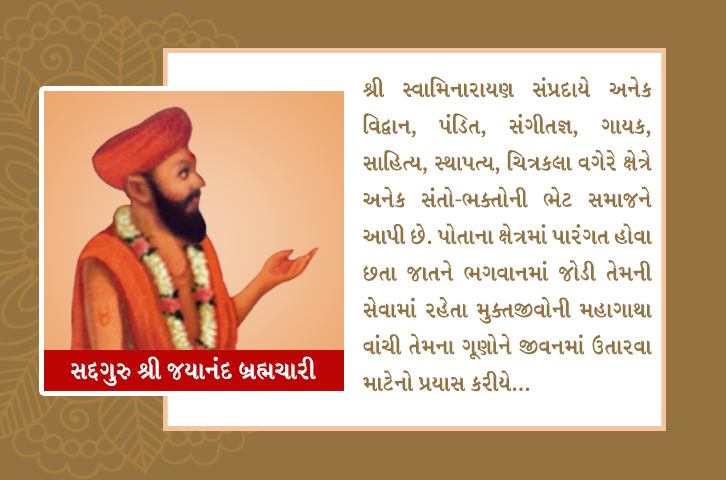 Whose consciousness of life were Chhutwur, Shrihari. Whose life was only wetting Bhaktanandan. Whose life was affectionate Snehasagar Sundarar was a saintly sree. Jainand Brahmacharis predecessor was Jairam Bhatt They are called avatars of gas. "I have been seeing Hali Mukhi from the heart of today." Aa Kirtan, also known as Jairam Brahmachari, who spread the flag of his life in the satsang society, is spreading the flag of his life.

After knowing that Survavatari Shrihari was manifested on this earth, he came to Sorath on his desire to do his darshan. After seeing the Hariña manifested in Dhoraji, the image of Harvar was saved in the room at the door and immediately got the samadhi. Seeing the divine Pratap of Lord Pratapat of awakening from Samadhi, Lord Krishna became a firm determinant. In the heart of his heart, the glory of the glory of the Lord,

"I have seen the happiness of Haley today, I have been seeing Harichi." Kirtan formed four positions. Immediately after praying at Lord Vishnu, he prayed and prayed, thankful! He wanted to see you for a long time. Today my human life was successful. Now keep me in your lunar service. Then Shreeji Maharaj kept the feathers unfolding from his dedication and kept him near him and initiated the novel Jayanandwari. He was very skillful in the cooking profession. He was very zealous and devoted to service. He used to serve as a farmer to carry letters written by Shriji Maharaj to the saints and devotees. He could perform forty gaas in the day.

Once upon a time, when a man struggled to meet the Hutasani, he saw a fauna tree lying on the road without seeing the Brahmachari. Seeing that tree, Brahmachari resolved that he should do moksha. This tree will take the flower of the calf and paint it with a shade of Maharaj. So keep the tree current. That is why the wind blows in the wind and the wind blows. He took cassada and brought a brahmachari cartilage. He painted the flowers of cassada with rosikavar Rajarajeshwar, and he attained the salvation of the tree. Jasanand Brahmacharis Aksharusa Sangh was born in 1886.

In the footsteps of Jaiyanand Brahmachari, who always gave satsang to the satsang society, becoming a businessman with love, devotion, service and devotion to the good of such small creatures