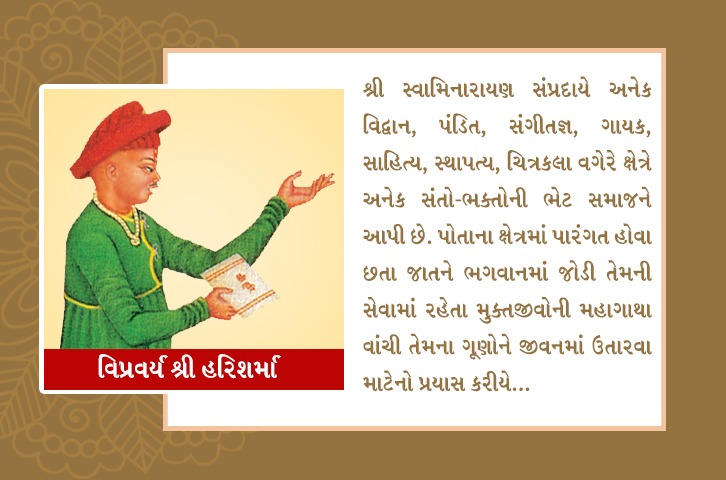 Those who have a continuous influence and saintly love. Whoever constantly abandoned Mayik sunda, suffering from Divyaand, used to adore Harivar. Whose divine concept of Param Samruti is seen in the other today as well as in their tradition. He was a native of Harisharma Umreth village. His fathers name was Gelabhai. He was a pure Mukmukhi with a pre-natal sacrifice. Due to childhood, repentance, worshiping the religion, worship the Lord. A holy saint-mahatma was associated with his vision of service. They constantly keep looking for Lord Milan.

Over time, Yogavivary received a gift from Gopalanand Swami. He became a unique servant of Sadguru and served him as a teacher of Gopalanand Swami. He received the blessings of the Sadguru, and in the life of Harisharma, the realization of Achyak and Parlaukik Gnan purush became the grace of Sri Lahiri.

Harsharma, according to astrology of every Muharshas of Shrihari auspicious event. Harisharma was appointed as the chief principal of the yatras of Vartal and Dabhan.

Vihari Lalji Maharaj took note of Harilalamrut and wrote that-

Prabhashankar, a learned scholar, praised her in Brahmana,

Akhtarand Varni also writes in Shree Hari Charitra that when the Samaj-jaljalani of Jalajiliya happened in the Varalatala. There, Shree Harisharma and Shri Kripaparam, both of the Viprons, took the worship of Pujappa in the hands of the Vedas by reciting the Vedas.

No occasion has been found in Harisharmas history, but a traditionally heard one event is very interesting.

Because of the extreme hardness of these elephants, including Harikrishna Maharaj, Shrikrishna, Radhika, Lakshmiji, Narayana, Vasudev, Dharmadev, Devotional devotees, in the Yajmandap of Ram Pratapaji Maharaj, there was trouble taking the devotees. The yagna started with Shri Lahiri. At that time, Harishma raised mantras of Shanti-Sukta and sat on the temple with the influence of the holy mantra at the mouth of the holy Brahman.

Harishma was candid, naive and reluctant. When the time comes, the service of Gods devotees is also done at a lot of prices. They were ridiculed by all the worldly entanglements, attachments, or maternal love. Such a devotee attained sahaj ji in his innocence and nishakha pravna by receiving the rajpas of Prabhu. At present, in his tradition, both Lord Brahma and Jagdishbhai are pleased with the saints, Yagna, Mahapuza and other ceremonies in the country.