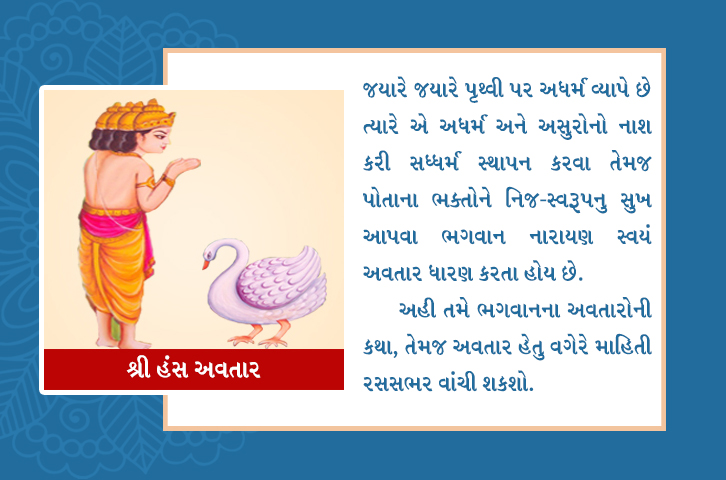 Srushti Vidhata Brahma was doing meditation with Rishi Maharishi. When the saints asked to answer a question asked by Brahma, Lord Swan appeared in the form.

Brahma asked the sage as an element of curiosity satyalokamam padharela welcome to come by the monks. Then the Rishis asked spiritual questions. Srilakadki was given when Brahma was giving satisfying answers. Worshiping the Father and questioning the highest role of knowledge.

Father! Only the mind of the flesh visayanubadhdha, subject gunanubadhdha, unless there is a factor of how salvation happens? And if there is no salvation, then what does this mean for the body? The meeting, including Brahmaji listening to the question, was unanimous. Brahma meditated on Paramatma to avoid the confusion of the question. To overcome the ideological crisis of law, the world lord Lord Sahasah has manifested itself.

The surprise of the Sage monks was not crossed. Brahmaji gave recognition to him. God Himself has given the answer to the question of Sunkadiko, so let us worship first. Nimbarka sampradayanuyayioni manyatache that the Lord had taught hansavatara assuming sanakadikone Shree Gopal Mantrarajano. Sankadak gave this mantra to Narada and Naradji gave to Mr. Nimbarkaacharya.