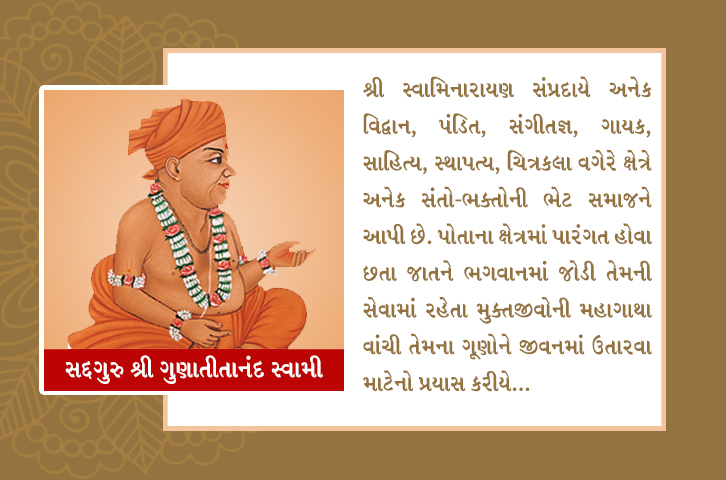 After the disappearance of Shreeji Maharaj, the saints who have given a lion in the development of the sect, have their first name, Sant Sadguru Shri Guanitantanand Swami.

Swamishri was born in a village in Bhadra in 1841. His fathers name was Bhalnath and mothers name was Sakir Bai. Childhood name was originally He received the power of priceless devotion. Autonomous autonomy from worldly life. Despite childhood devotional worship has subsided, though, worldly interaction is very good.

Once Shreeji Maharaj, who was working in a sugar cane, said in a speech filled with compassion to Shriji Maharaj. What are we going to do and what do we do? "Brahmtej" In response to this question, Swamiji immediately left home and left for Sanyas. In 1866, Dakshina took the initiation and became Gunatitanand Swami from Mooluji. Due to sadism and awareness, he attained such a high status that he is aware, dream and sleep; In all these three states, the darshan of an unmarked idol appeared. If the mistake comes gradually, then the palate will break out. This is the situation.

Some of the ardent saints in the community took their place, with their knowledge, somebodys power, some of them with music, somebody from the Vaidyas service to the sect, with the reverence of history. In it, more than the acnes subtle leopard, the sectarian horoscope has its own unique impression, Sant Gunatitanand Swami, who gives a promising impression even more challenging.

Shreeji Maharajs loyalty towards whose words today is still sacred to the sacred shrine. The art of talking about such situations was an important gift of nature. If the listeners heart does not descend, he is not a master. From the poor to the scholars and the king-maharajas, one reveals the same thing as the bhakti bhaiti. Not only in this tradition but also in Muslim community of Junagadh, it was a good influence on the saints saintliness.

In the year 1923, in the Gondal, Shree Hari Desai got the honor of Shreeji by renouncing this body, and this satyavari, who lived in the Mahantapada of Junagadh temple for 41 years. Cotti Cotti Vandan